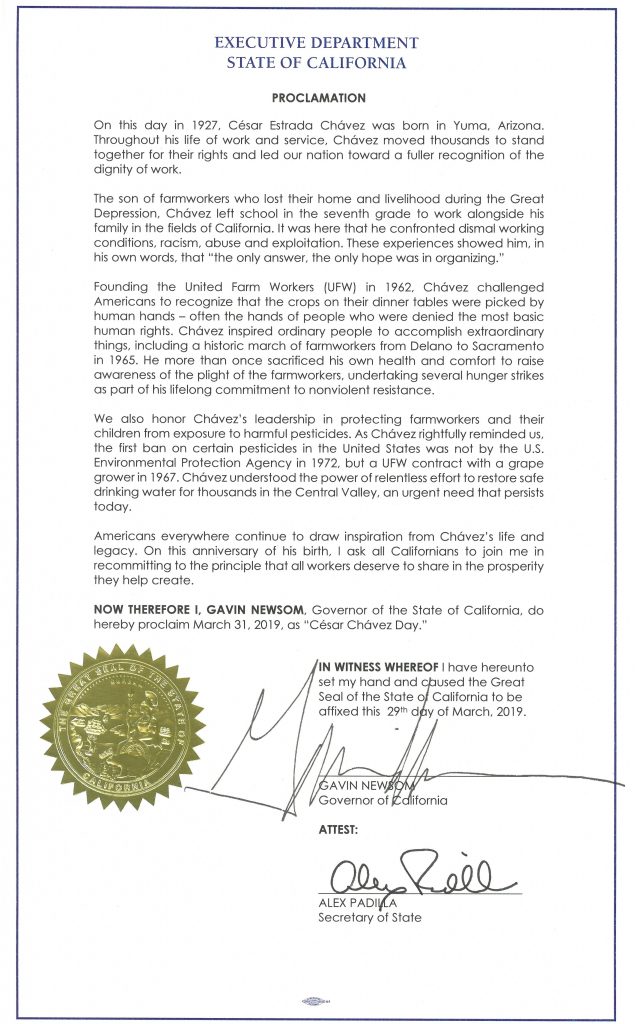 On this day in 1927, César Estrada Chávez was born in Yuma, Arizona. Throughout his life of work and service, Chávez moved thousands to stand together for their rights and led our nation toward a fuller recognition of the dignity of work.

The son of farmworkers who lost their home and livelihood during the Great Depression, Chávez left school in the seventh grade to work alongside his family in the fields of California. It was here that he confronted dismal working conditions, racism, abuse and exploitation. These experiences showed him, in his own words, that “the only answer, the only hope was in organizing.”

Founding the United Farm Workers (UFW) in 1962, Chávez challenged Americans to recognize that the crops on their dinner tables were picked by human hands – often the hands of people who were denied the most basic human rights. Chávez inspired ordinary people to accomplish extraordinary things, including a historic march of farmworkers from Delano to Sacramento in 1965. He more than once sacrificed his own health and comfort to raise awareness of the plight of the farmworkers, undertaking several hunger strikes as part of his lifelong commitment to nonviolent resistance.

We also honor Chávez’s leadership in protecting farmworkers and their children from exposure to harmful pesticides. As Chávez rightfully reminded us, the first ban on certain pesticides in the United States was not by the U.S. Environmental Protection Agency in 1972, but a UFW contract with a grape grower in 1967. Chávez understood the power of relentless effort to restore safe drinking water for thousands in the Central Valley, an urgent need that persists today.

Americans everywhere continue to draw inspiration from Chávez’s life and legacy. On this anniversary of his birth, I ask all Californians to join me in recommitting to the principle that all workers deserve to share in the prosperity they help create.

NOW THEREFORE I, GAVIN NEWSOM, Governor of the State of California, do hereby proclaim March 31, 2019, as “César Chávez Day.”

IN WITNESS WHEREOF I have hereunto set my hand and caused the Great Seal of the State of California to be affixed this 29th day of March 2019.