Members of Legislative Women’s Caucus joined the Newsoms in previewing sales tax exemptions for diapers and menstrual products, expansion of child care and the Earned Income Tax Credit for families

SACRAMENTO – During his first few months in office, Governor Gavin Newsom has made affordability the chief economic pillar of his California for All agenda. Nowhere was that more evident than in his January budget proposal, which included a series of proposals aimed at making living in California more affordable for families. From health care to housing to early childhood and higher education, the budget Governor Newsom unveiled in January aimed at tackling the main drivers of costs for California families. And on Thursday, the Governor’s office will release a revised budget proposal that doubles down on that approach and opens up a new front in his fight for affordability.

Today, ahead of the Thursday budget release, Governor Newsom and First Partner Jennifer Siebel Newsom joined members of the California Legislative Women’s Caucus to preview a package of proposals in the budget focused on helping parents. The proposals, which the administration is calling its “Parents Agenda,” address specific cost of living issues faced by young parents and parents of small children. This includes a sales tax and use exemption for diapers and menstrual products, increased child care and increasing the proposed state Earned Income Tax Credit for kids under the age of 6.

“The cost crisis is the foundational economic and quality of life challenge that California families face,” said Governor Gavin Newsom. ”As anyone who takes care of kids can tell you — these costs add up. From diapers to child care, raising kids is expensive wherever you live. But when you factor in the cost of living here in California, it is close to impossible. That’s why, ahead of the May Revise, we are gathered here today to preview something I’m calling a Parents Agenda. It’s a set of policies in the budget that helps young families address the cost pressures they face when they look at their family budget.” 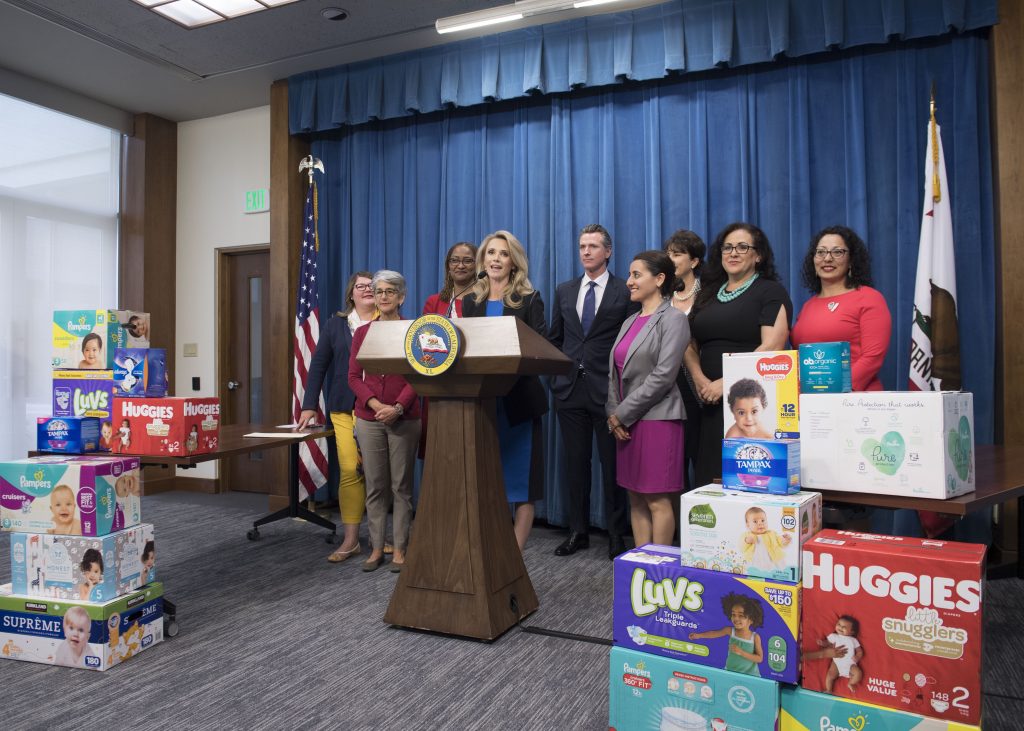 Diapers cost young families up to $1,200 a year and 1 in 3 families in the United States struggle to afford diapers. Low-income families with young children spend 14 percent of after-tax income on diapers. The announcement today includes a sales and use tax exemption for diapers used by infants and toddlers.

California women spend $20 million annually in taxes on menstrual products, paying on average $7 a month for 40 years of their lives. The Governor announced a sales and use tax exemption for tampons, sanitary napkins, menstrual sponges and menstrual cups – helping both families and women.

The Governor also announced a $54.2 million investment in CalWORKs stage 1 child care funding that will allow uninterrupted child care for eligible children. The revised budget proposal also allocates $80.5 million of Proposition 64 revenue to child care. The Governor also proposes increasing the proposed tax credit for families with kids under the age of 6, from $500 to $1,000.

In addition to the items above, which will be new additions on Thursday, the revised budget plan carries forward a number of priorities that Governor Newsom included in his January budget proposal: