In Face of Attacks on Women’s Health, Governor and First Partner Rally in Support of Reproductive Health and Freedom in San Diego

While other states try to undermine Roe v. Wade, the Governor’s budget proposes $100 million to expand access to reproductive and sexual health care in California

SAN DIEGO – On the final stop of his statewide “California for All” health care tour, Governor Gavin Newsom and First Partner Jennifer Siebel Newsom rallied with San Diego legislators, Planned Parenthood of the Pacific Southwest, patients and local advocates in support of reproductive health and freedom. While the White House and states like Alabama attack reproductive health care, Governor Newsom highlighted his historic $100 million budget proposal to invest in reproductive and sexual health care in California.

“While men in legislatures across the country are telling women what they can and can’t do with their bodies, California is taking the exact opposite approach,” said Governor Newsom. “We aren’t just protecting reproductive freedom – we are seeking to greatly expand access to reproductive and sexual health care here in the state.” 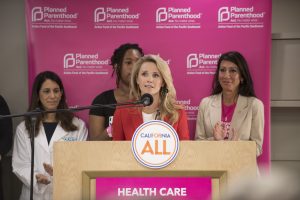 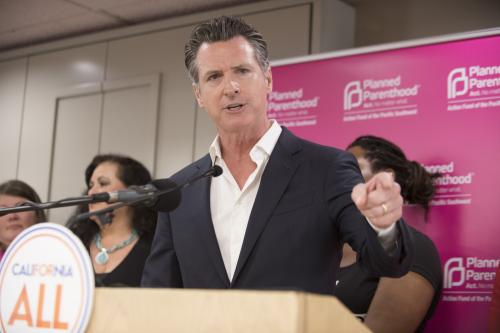 On his first day in office, Governor Newsom proposed a series of first-in-the-nation actions to make health care more affordable for all Californians and move the state closer toward achieving the goal of health care for all.

A little over a week after he released his revised budget that advances these priorities, Governor Newsom has taken his proposals on the road as part of the statewide “California for All” health care tour. Governor Newsom launched the tour Tuesday in Sacramento and has traveled across the state this week hosting events that highlight how the health care initiatives in his budget proposal would help families meet their health care challenges. Each event focused on one of the proposals in his health care package and the tour has hosted events in San Francisco, Los Angeles, Sacramento and ending today in San Diego.

Recent data shows that health care and prescription drugs are chief among those concerns for California families. Those buying on the individual market will see an average 9 percent rise in health care costs this year, according to Covered California. American families have seen their prescription drug costs nearly double since the year 2000, according to the Kaiser Family Foundation and prescription drug pricing is one of the largest drivers of rising health care costs. In January, aReuters report found 30 drug manufacturers that did business with the State of California planned to raise their prices in January.