SACRAMENTO – Governor Gavin Newsom today issued a proclamation declaring May 27, 2019, as “Memorial Day” in the State of California. 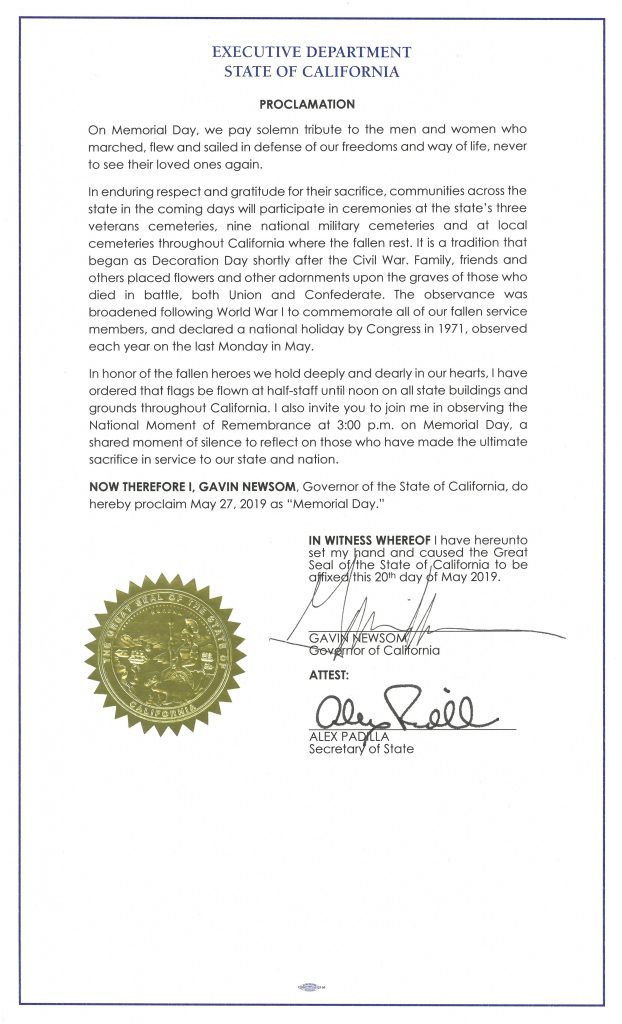 On Memorial Day, we pay solemn tribute to the men and women who marched, flew and sailed in defense of our freedoms and way of life, never to see their loved ones again.

In enduring respect and gratitude for their sacrifice, communities across the state in the coming days will participate in ceremonies at the state’s three veterans cemeteries, nine national military cemeteries and at local cemeteries throughout California where the fallen rest. It is a tradition that began as Decoration Day shortly after the Civil War. Family, friends and others placed flowers and other adornments upon the graves of those who died in battle, both Union and Confederate. The observance was broadened following World War I to commemorate all of our fallen service members, and declared a national holiday by Congress in 1971, observed each year on the last Monday in May.

In honor of the fallen heroes we hold deeply and dearly in our hearts, I have ordered that flags be flown at half-staff until noon on all state buildings and grounds throughout California. I also invite you to join me in observing the National Moment of Remembrance at 3:00 p.m. on Memorial Day, a shared moment of silence to reflect on those who have made the ultimate sacrifice in service to our state and nation.

NOW THEREFORE I, GAVIN NEWSOM, Governor of the State of California, do hereby proclaim May 27, 2019 as “Memorial Day.”

IN WITNESS WHEREOF I have hereunto set my hand and caused the Great Seal of the State of California to be affixed this 22nd day of May 2019.