SACRAMENTO — Governor Gavin Newsom issued a proclamation declaring June 15, 2019 as “Juneteenth National Freedom Day: A Day of Observance” in the State of California. 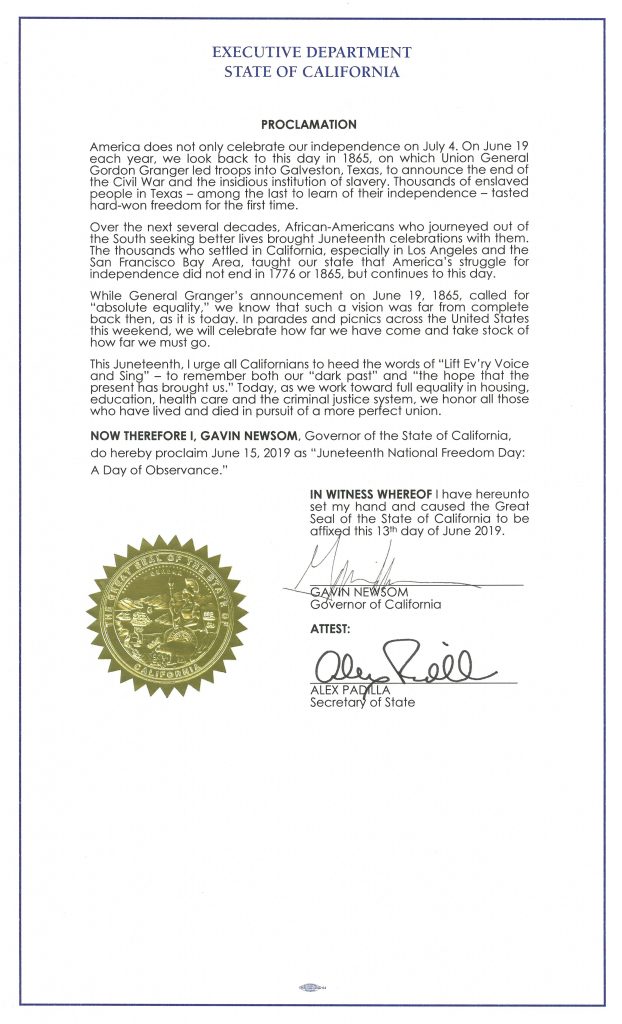 America does not only celebrate our independence on July 4. On June 19 each year, we look back to this day in 1865, on which Union General Gordon Granger led troops into Galveston, Texas, to announce the end of the Civil War and the insidious institution of slavery. Thousands of enslaved people in Texas – among the last to learn of their independence – tasted hard-won freedom for the first time.

Over the next several decades, African-Americans who journeyed out of the South seeking better lives brought Juneteenth celebrations with them. The thousands who settled in California, especially in Los Angeles and the San Francisco Bay Area, taught our state that America’s struggle for independence did not end in 1776 or 1865, but continues to this day.

While General Granger’s announcement on June 19, 1865, called for “absolute equality,” we know that such a vision was far from complete back then, as it is today. In parades and picnics across the United States this weekend, we will celebrate how far we have come and take stock of how far we must go.

This Juneteenth, I urge all Californians to heed the words of “Lift Ev’ry Voice and Sing” – to remember both our “dark past” and “the hope that the present has brought us.” Today, as we work toward full equality in housing, education, health care and the criminal justice system, we honor all those who have lived and died in pursuit of a more perfect union.

NOW THEREFORE I, GAVIN NEWSOM, Governor of the State of California, do hereby proclaim June 15, 2019 as “Juneteenth National Freedom Day: A Day of Observance.”

IN WITNESS WHEREOF I have hereunto set my hand and caused the Great Seal of the State of California to be affixed this 13th day of June 2019.