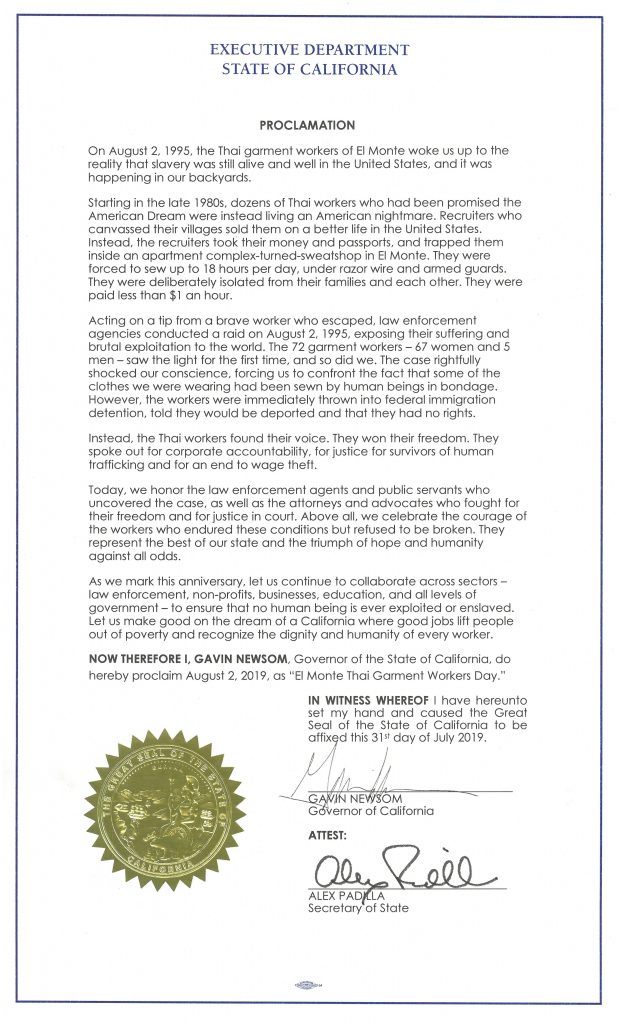 On August 2, 1995, the Thai garment workers of El Monte woke us up to the reality that slavery was still alive and well in the United States, and it was happening in our backyards.

Starting in the late 1980s, dozens of Thai workers who had been promised the American Dream were instead living an American nightmare. Recruiters who canvassed their villages sold them on a better life in the United States. Instead, the recruiters took their money and passports, and trapped them inside an apartment complex-turned-sweatshop in El Monte. They were forced to sew up to 18 hours per day, under razor wire and armed guards. They were deliberately isolated from their families and each other. They were paid less than $1 an hour.

Acting on a tip from a brave worker who escaped, law enforcement agencies conducted a raid on August 2, 1995, exposing their suffering and brutal exploitation to the world. The 72 garment workers – 67 women and 5 men – saw the light for the first time, and so did we. The case rightfully shocked our conscience, forcing us to confront the fact that some of the clothes we were wearing had been sewn by human beings in bondage. However, the workers were immediately thrown into federal immigration detention, told they would be deported and that they had no rights.

Instead, the Thai workers found their voice. They won their freedom. They spoke out for corporate accountability, for justice for survivors of human trafficking and for an end to wage theft.

Today, we honor the law enforcement agents and public servants who uncovered the case, as well as the attorneys and advocates who fought for their freedom and for justice in court. Above all, we celebrate the courage of the workers who endured these conditions but refused to be broken. They represent the best of our state and the triumph of hope and humanity against all odds.

As we mark this anniversary, let us continue to collaborate across sectors – law enforcement, non-profits, businesses, education, and all levels of government – to ensure that no human being is ever exploited or enslaved. Let us make good on the dream of a California where good jobs lift people out of poverty and recognize the dignity and humanity of every worker.

IN WITNESS WHEREOF I have hereunto set my hand and caused the Great Seal of the State of California to be affixed this 31st day of July 2019.