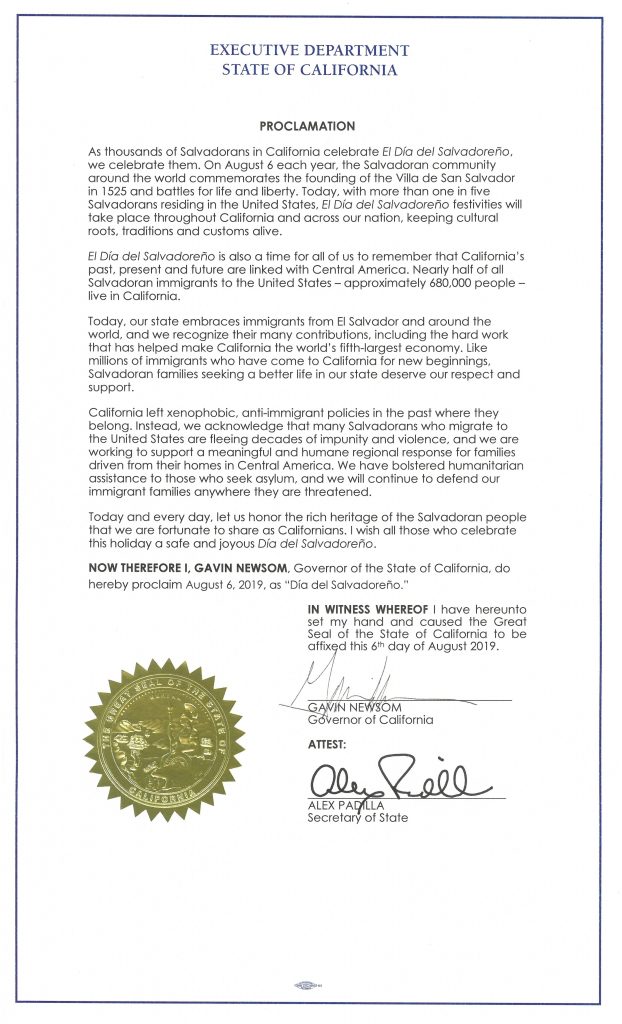 As thousands of Salvadorans in California celebrate El Día del Salvadoreño, we celebrate them. On August 6 each year, the Salvadoran community around the world commemorates the founding of the Villa de San Salvador in 1525 and battles for life and liberty. Today, with more than one in five Salvadorans residing in the United States, El Día del Salvadoreño festivities will take place throughout California and across our nation, keeping cultural roots, traditions and customs alive.

El Día del Salvadoreño is also a time for all of us to remember that California’s past, present and future are linked with Central America. Nearly half of all Salvadoran immigrants to the United States – approximately 680,000 people – live in California.

Today, our state embraces immigrants from El Salvador and around the world, and we recognize their many contributions, including the hard work that has helped make California the world’s fifth-largest economy. Like millions of immigrants who have come to California for new beginnings, Salvadoran families seeking a better life in our state deserve our respect and support.

California left xenophobic, anti-immigrant policies in the past where they belong. Instead, we acknowledge that many Salvadorans who migrate to the United States are fleeing decades of impunity and violence, and we are working to support a meaningful and humane regional response for families driven from their homes in Central America. We have bolstered humanitarian assistance to those who seek asylum, and we will continue to defend our immigrant families anywhere they are threatened.

Today and every day, let us honor the rich heritage of the Salvadoran people that we are fortunate to share as Californians. I wish all those who celebrate this holiday a safe and joyous Día del Salvadoreño.

NOW THEREFORE I, GAVIN NEWSOM, Governor of the State of California, do hereby proclaim August 6, 2019, as “Día del Salvadoreño.”

IN WITNESS WHEREOF I have hereunto set my hand and caused the Great Seal of the State of California to be affixed this 6th day of August 2019.