SAN FRANCISCO – In the Sunset District in San Francisco, Governor Gavin Newsom met with Californians struggling to secure housing near their work. At the event, Governor Newsom highlighted the historic investment this year’s California budget made in housing and discussed executive actions he has taken to confront California’s housing shortage and housing affordability crisis. He also highlighted more housing actions the state could take before year’s end – enacting strong renter and anti-gouging protection, streamlining zoning and permitting, and creating a permanent fund for legal housing aid.

“The high price of housing and rent makes it almost impossible for many families to live in the communities where they work,” said Governor Newsom. “Housing costs are a huge impediment to businesses finding and attracting workers. And families see how their paycheck doesn’t go nearly as far as it should. I’ve long said that California must use every tool in its toolbox to confront the housing affordability crisis, and that’s what this administration will continue to do.”

Governor Newsom was joined by San Francisco Mayor London Breed, and the two spoke with a teacher who lives at home with her parents because she can’t afford housing on her own. They heard from a San Francisco firefighter and retired sheriff deputy who were only able to purchase homes after receiving a Downpayment Assistance Loan from the Mayor’s Office of Housing and Community Development.

Housing affordability has been a top priority for Governor Newsom. The state budget signed in June made a historic $1.75 billion investment in new housing and created major incentives – both sticks and carrots – to incentivize cities to approve new home construction. The budget also provided $20 million for legal services for renters facing eviction as well as $1 billion to help cities and counties fight homelessness.

The high cost of housing and rent has also been the focus of executive action. In the first weeks of his administration, Governor Newsom signed an executive order that created an inventory of all excess state land in order to find parcels to develop into affordable housing, and in April launched partnerships with six California cities to develop affordable housing on that land. The Newsom Administration has also enforced state housing law – putting more than forty cities on notice that they were out of compliance with state housing requirements and in jeopardy of legal action. Last week, he unveiled a proposal to create a permanent fund to provide legal support to Californians facing eviction or foreclosure.

Click here to learn more details about the Governor’s actions to date on housing and homelessness. Below is a visual aid the Governor used to highlight his 2019 housing agenda. 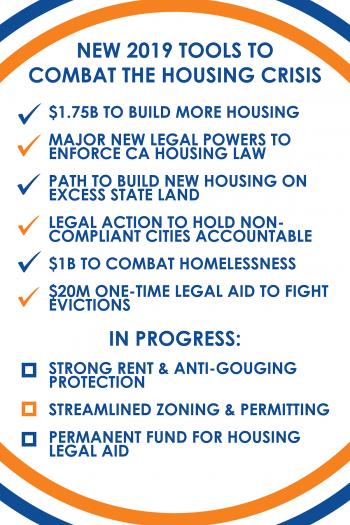