Ahead of Climate Week, Governor ordered the creation of a Climate Investment Framework to leverage the state’s $700 billion CalPERS, CalSTRS and UC Retirement Program portfolio to drive investment toward carbon-neutral technologies, and signed legislation strengthening the state’s emissions standards and establishing the nation’s first “smog check” for diesel trucks

NEW YORK – Governor Gavin Newsom touted California’s climate leadership today while delivering opening remarks at Climate Week NYC, speaking to foreign dignitaries about how the state can be a model for the country and the world.

“As we change the way we produce and consume energy, it is spawning new companies, new energy, new growth. We lead in venture capital and green tech,” said Governor Newsom. “Five to one — five to one, the number of clean energy jobs in the State of California versus fossil fuel jobs. Which makes then the paradigm of this notion of alternative energy flip on its head. Alternative energy in the State of California is fossil fuel energy.” 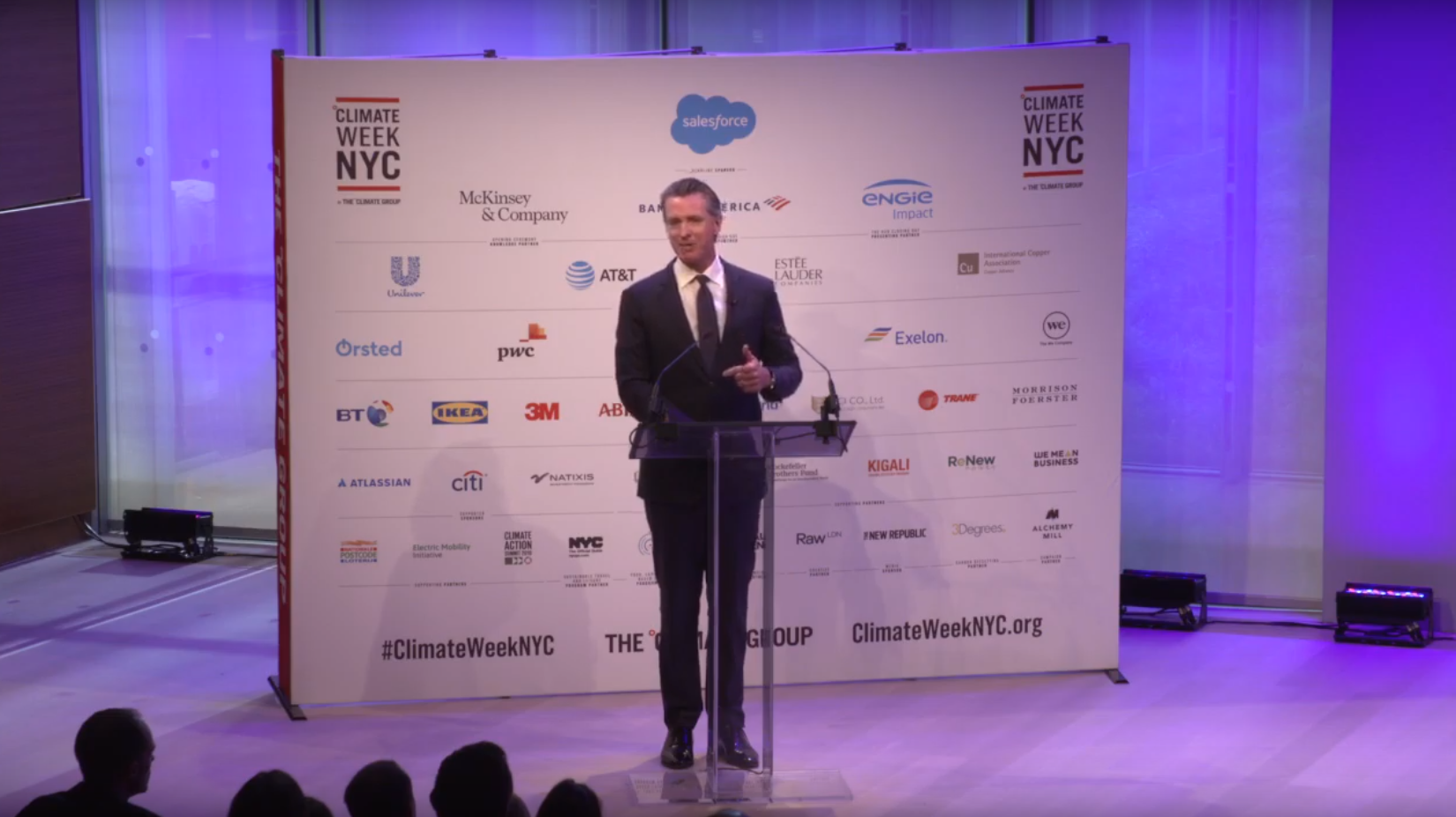 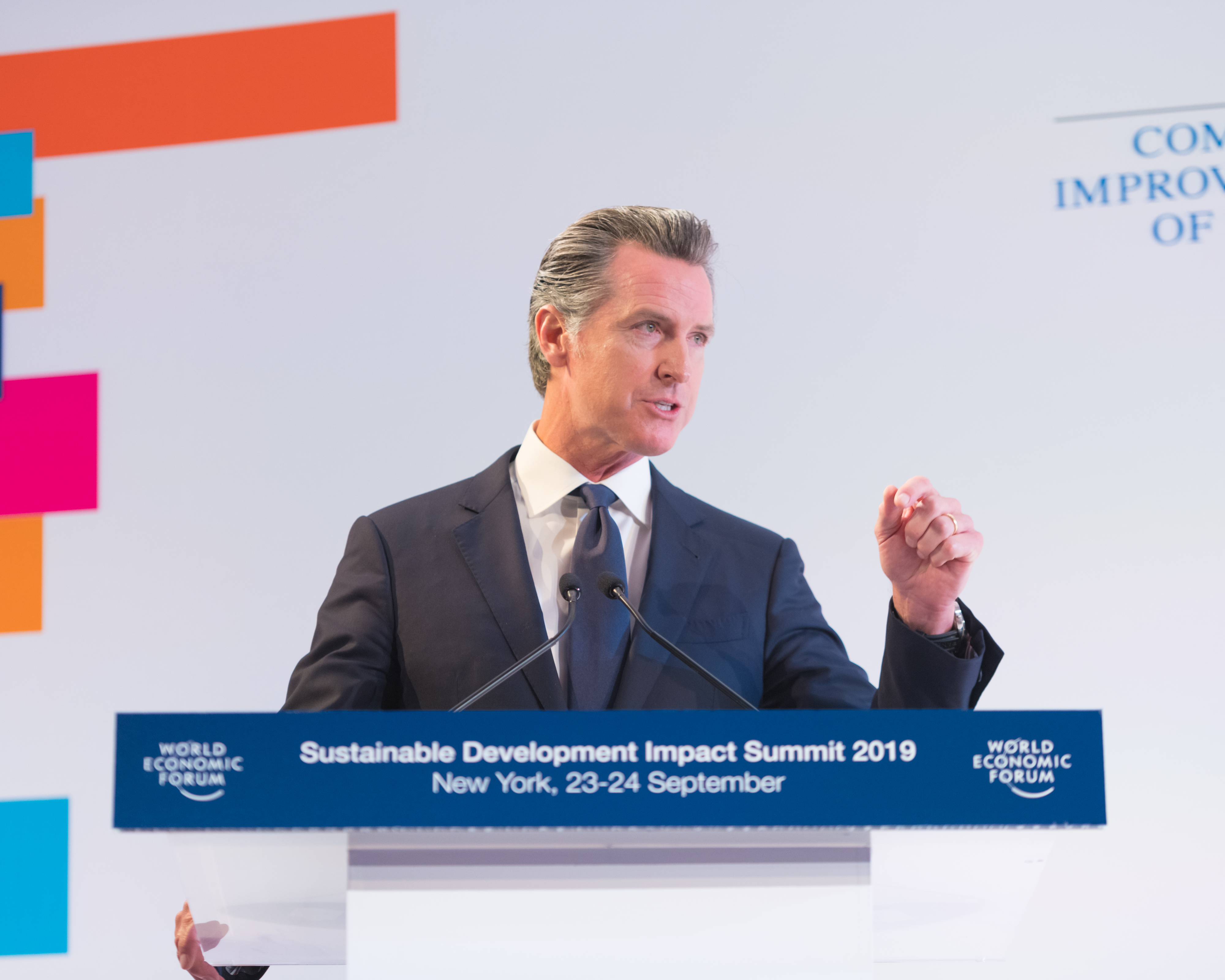 Below are the Governor’s Climate Week NYC opening remarks, as delivered:

Good morning everybody. By the way, it’s always nice to follow the Prime Minister of Denmark because we love to say in America about Denmark, the American Dream is alive and well in Denmark. Which is a whole other conversation. So, God bless you, Madame Prime Minister.

I’m here after a long line of Democrats and Republicans in the United States that come from the State of California that get it and want to get it done. I’m very proud to be a new governor following Governor Jerry Brown who demonstrably has been leading an international effort, as Helen said, not only in the Under2 MOU — 220 jurisdictions now around the world representing 43 percent of the world’s economy have committed to those protocols. But the leadership emanating out of California is also a point of pride. As a fifth generation Californian, I’ve seen it my entire life but I’ve never seen it at the level and scale that we’ve experienced it in the last five or six years.

Just a few years ago, Governor Brown, just five days after President Trump announced his intention to pull out of the Paris Accord, Governor Brown pulled out of his driveway, made his way to the airport, flew to Beijing, sat down in the presidential palace with President Xi — not as a head of state, but a head of a state, the State of California — and doubled down on the Paris Accord. That’s California’s leadership. The fifth largest economy in the world, a state that’s not just sitting back pointing fingers. We’re not bystanders, we have agency and we can shape this debate, like all of us, we can shape the future.

I don’t know what the hell happened to this country that we have the President that we do today, on this issue. I mean that, let me just dispense with that. Because it’s a damn shame, it really is. I’m not a little embarrassed about it, I’m absolutely humiliated by what’s going on. The idea that we pull out of Paris, or at least announce our intention to pull out of Paris. The idea that now he’s attacking states’ rights — the State of California that for over half a century has had a federal waiver that goes back to President Richard Nixon and former Governor Ronald Reagan that established fuel efficiency and tailpipe emission standards, not only for our state but led to other states joining our protocols. The idea that he would even attack that goes to the core of conservative values, again, of states’ rights.

To bring in as the President did the automobile manufactures, threaten their very existence with tariffs, threatening their business models if they continued to negotiate with the State of California. I mean, that stuff doesn’t happen in many counties in the world anymore, let alone in 2019 in the United States of America. That’s humiliating and we have a responsibility to do something about that.

In California, we are doing that. We’re punching above our weight. We had our 60th lawsuit against the Trump Administration on Friday, and we’re winning. I know we’re supposed to stay above politics but you can’t on this issue, you really can’t. Which is just a shame because as I noted, it was Reagan, it was Nixon, Arnold Schwarzenegger – this wasn’t a partisan issue in the United States of America. Our modern environmental movement goes back to the business community being sick and tired, in Los Angeles, of smog, they wanted to do something about it. Led to, ultimately, the Clean Air Act itself. We’ve always understood that. And so, what I’m positing, what I’m arguing for is a different rationale to get out of our ideological silos. And the Prime Minister brought this up, one of the ways you can attract interest in the other side is by looking at things through the economic prism.

It’s an interesting fact, while this country is running $1 trillion a year deficits, California is running historic budget surpluses. It’s an interesting fact that California has enjoyed its lowest unemployment rate in its history, more consecutive months of net job creation than at any time in its history, and significantly outperforming the United States of America in GDP growth over a five-year period — not despite our environmental strategies, but because of our environmental strategies.

As we change the way we produce and consume energy, it is spawning new companies, new energy, new growth. We lead in venture capital and green tech. Five to one — five to one, the number of clean energy jobs in the State of California versus fossil fuel jobs. Which makes then the paradigm of this notion of alternative energy flip on its head.

Alternative energy in the State of California is fossil fuel energy. Alternative energy no longer defined by wind and solar and battery technology, which are dominant now. The economy is growing, a fully functioning cap-and-trade program, the most audacious low-carbon green growth goals in the United States of America. There’s nothing left for me to sign — it’s 100 percent across the board, in every category. But, the difference is, we’re in the “how” business. We’re implementing, we’re applying our ideals, we’re manifesting those ideals in a real way that is about not just growth, but also as it was noted earlier, inclusion.

Issues of environmental justice front and center, over half of the investment we put in our cap-and-trade proceeds goes to disadvantaged communities, goes to support our elderly, urban poor, and folks in rural communities, a real focus in energy in terms of not just focusing on electricity, which is a relatively small subset of our overall portfolio, but starting to get in the industrial sector, the commercial sector, and the agricultural sector. And for no other reason, and I will conclude here in a moment, because climate change, for us, is not an abstract.

If you still have a scintilla of doubt, come to California. After historic wildfires back to back, fifteen of the most destructive wildfires just in the last ten years. A state with historic droughts. A state with historic floods. Mother Nature has joined the conversation. This is not an intellectual exercise for us. A thousand miles of coast. You talk about sea level rise — for every inch, we lose eight feet of our beach. You talk about two degrees Celsius — that’s fifteen-hundred feet that we lose of our snowpack and our snowline. This is not an abstract issue.

I watched that fire up in Butte County, where President Trump himself took the time to go out — his response was we needed to rake our forests. Our response is, we need to address the root causes of why the hots are getting hotter, the dries are getting drier, and the wets are getting wetter. And address this fundamental issue that defines our time. And we’ve talked about it terms of the environment, but you all know it’s a human issue, it’s a health issue, it’s about who we are, what we represent, it’s about our values. It’s about what we leave, not just to our kids and our grandkids, but it’s about our principles.

And so for me, forgive me for being animated and not being cogent with my thoughts, all I want to say is — if you don’t like the way the world looks, at least in the United States, when you’re standing up, stand on your head and go local. Because remarkable things are happening in the United States at the local level. Not just California, but also cities. Cities large and small, democrat administrations, republican administrations that are doing something about this, that are implementing and applying their values at scale. And so, please don’t walk away just reading the headlines and watching the news clips about where our President wants to take the United States as it relates to low-carbon green growth.

Just consider this magical place we call home, the United States, with fifty states doing remarkable things and so many thousands of cities that are stepping up and stepping in to this debate. It’s a point of optimism and it’s a point of pride. Again, coming from the great State of California, thank you all very, very much.