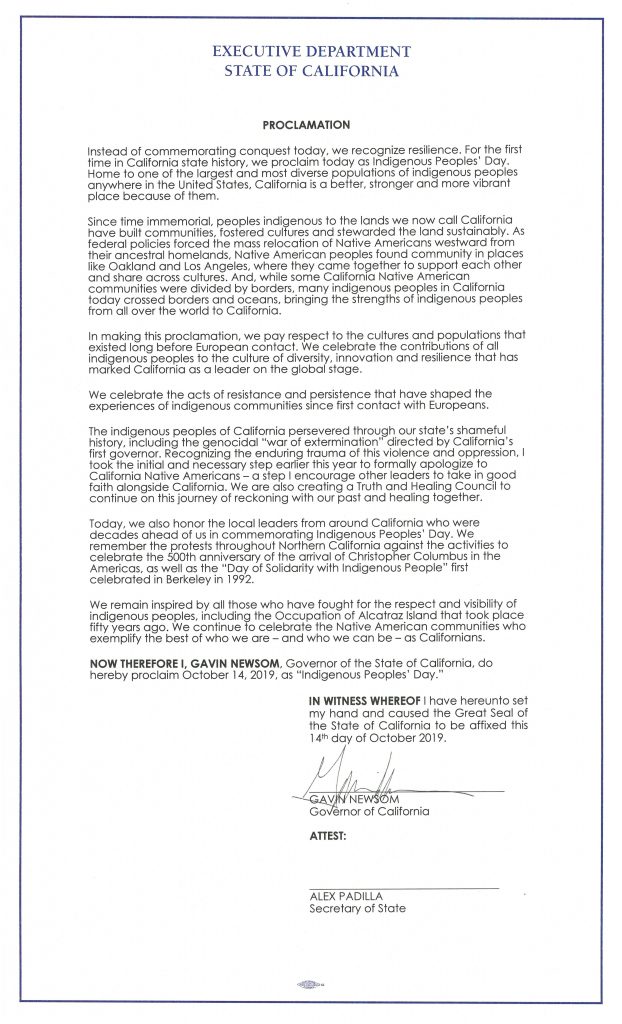 Instead of commemorating conquest today, we recognize resilience. For the first time in California state history, we proclaim today as Indigenous Peoples’ Day. Home to one of the largest and most diverse populations of indigenous peoples anywhere in the United States, California is a better, stronger and more vibrant place because of them.

Since time immemorial, peoples indigenous to the lands we now call California have built communities, fostered cultures and stewarded the land sustainably. As federal policies forced the mass relocation of Native Americans westward from their ancestral homelands, Native American peoples found community in places like Oakland and Los Angeles, where they came together to support each other and share across cultures. And, while some California Native American communities were divided by borders, many indigenous peoples in California today crossed borders and oceans, bringing the strengths of indigenous peoples from all over the world to California.

In making this proclamation, we pay respect to the cultures and populations that existed long before European contact. We celebrate the contributions of all indigenous peoples to the culture of diversity, innovation and resilience that has marked California as a leader on the global stage.

We celebrate the acts of resistance and persistence that have shaped the experiences of indigenous communities since first contact with Europeans.

The indigenous peoples of California persevered through our state’s shameful history, including the genocidal “war of extermination” directed by California’s first governor. Recognizing the enduring trauma of this violence and oppression, I took the initial and necessary step earlier this year to formally apologize to California Native Americans – a step I encourage other leaders to take in good faith alongside California. We are also creating a Truth and Healing Council to continue on this journey of reckoning with our past and healing together.

Today, we also honor the local leaders from around California who were decades ahead of us in commemorating Indigenous Peoples’ Day. We remember the protests throughout Northern California against the activities to celebrate the 500th anniversary of the arrival of Christopher Columbus in the Americas, as well as the “Day of Solidarity with Indigenous People” first celebrated in Berkeley in 1992.

We remain inspired by all those who have fought for the respect and visibility of indigenous peoples, including the Occupation of Alcatraz Island that took place fifty years ago. We continue to celebrate the Native American communities who exemplify the best of who we are – and who we can be – as Californians.

NOW THEREFORE I, GAVIN NEWSOM, Governor of the State of California, do hereby proclaim October 14, 2019, as “Indigenous Peoples’ Day.”

IN WITNESS WHEREOF I have hereunto set my hand and caused the Great Seal of the State of California to be affixed this 14th day of October 2019.