The California Earthquake Early Warning System will marry a new smartphone application with traditional alert and warning delivery methods such as Wireless Emergency Alerts (WEA). The system uses ground motion sensors from across the state to detect earthquakes before humans can feel them, and is automated to notify Californians so that they can “Drop, cover and hold on” in advance of an earthquake.

“Nothing can replace families having a plan for earthquakes and other emergencies,” said Governor Newsom. “And we know the Big One might be around the corner. I encourage every Californian to download this app and ensure your family is earthquake ready.” 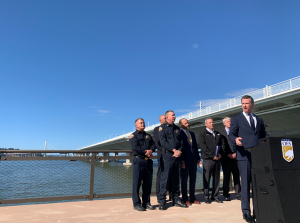 The app can provide seconds of warning before the ground starts to shake from a nearby quake – enough time to drop, cover and hold on to help prevent injury.

Initially, the new app will deliver alerts to people for earthquakes exceeding magnitude 4.5 in their area. Designed by University of California, Berkeley seismologists and engineers, the state earthquake early warning app is now available for download to IOS users through iTunes, and through GooglePlay stores for Android phones.

Warnings delivered through the system are based on a computerized program called ShakeAlert operated by the U.S. Geological Survey (USGS) that analyzes data from seismic networks in California, calculates preliminary magnitudes, and then estimates which areas will feel shaking.

The announcement is just the latest example of Governor Newsom and his emergency management team seeking to utilize better equipment, new ideas and innovation to better prepare for and respond to natural disasters.

“Today’s announcement reflects our commitment at Cal OES and across the Administration to use the best available science and technology for earthquake detection and warning. These early notifications greatly increase our ability to prevent injuries and even save lives,” said Mark Ghilarducci, Director of the Governor’s Office of Emergency Services.

Governor Newsom and the Legislature have made significant investments to fund disaster planning and preparedness – including earthquake early warning – in the 2019 Budget Act. This year’s enacted budget included $16.3 million one-time General Fund to finish the build-out of the system, including finishing seismic stations installation, adding GPS stations to the network, improving telemetry and launching an education campaign.