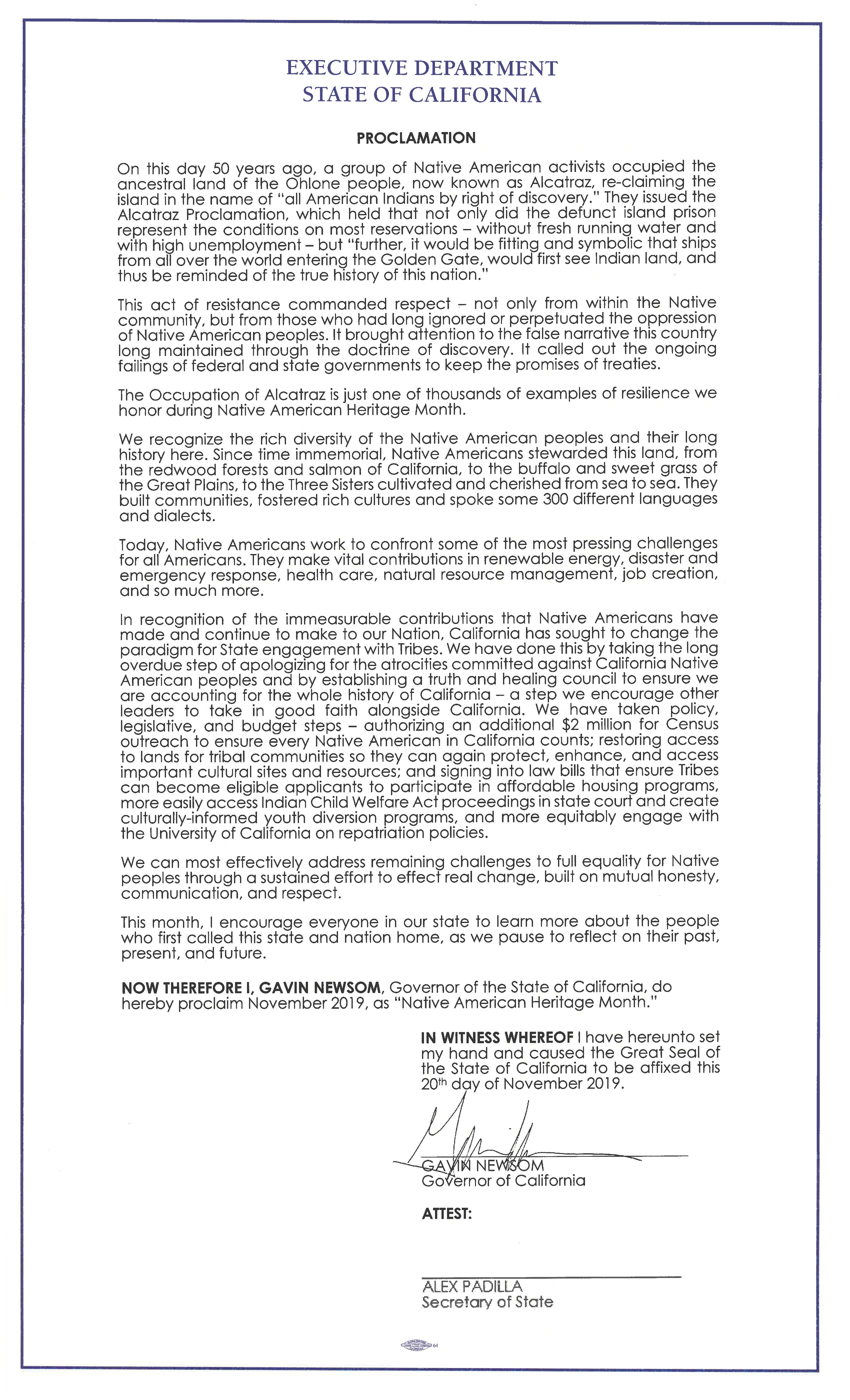 On this day 50 years ago, a group of Native American activists occupied the ancestral land of the Ohlone people, now known as Alcatraz, re-claiming the island in the name of “all American Indians by right of discovery.” They issued the Alcatraz Proclamation, which held that not only did the defunct island prison represent the conditions on most reservations – without fresh running water and with high unemployment – but “further, it would be fitting and symbolic that ships from all over the world entering the Golden Gate, would first see Indian land, and thus be reminded of the true history of this nation.”

This act of resistance commanded respect – not only from within the Native community, but from those who had long ignored or perpetuated the oppression of Native American peoples. It brought attention to the false narrative this country long maintained through the doctrine of discovery. It called out the ongoing failings of federal and state governments to keep the promises of treaties.

The Occupation of Alcatraz is just one of thousands of examples of resilience we honor during Native American Heritage Month.

We recognize the rich diversity of the Native American peoples and their long history here. Since time immemorial, Native Americans stewarded this land, from the redwood forests and salmon of California, to the buffalo and sweet grass of the Great Plains, to the Three Sisters cultivated and cherished from sea to sea. They built communities, fostered rich cultures and spoke some 300 different languages and dialects.

Today, Native Americans work to confront some of the most pressing challenges for all Americans. They make vital contributions in renewable energy, disaster and emergency response, health care, natural resource management, job creation, and so much more.

In recognition of the immeasurable contributions that Native Americans have made and continue to make to our Nation, California has sought to change the paradigm for State engagement with Tribes. We have done this by taking the long overdue step of apologizing for the atrocities committed against California Native American peoples and by establishing a truth and healing council to ensure we are accounting for the whole history of California – a step we encourage other leaders to take in good faith alongside California. We have taken policy, legislative, and budget steps – authorizing an additional $2 million for Census outreach to ensure every Native American in California counts; restoring access to lands for tribal communities so they can again protect, enhance, and access important cultural sites and resources; and signing into law bills that ensure Tribes can become eligible applicants to participate in affordable housing programs, more easily access Indian Child Welfare Act proceedings in state court and create culturally-informed youth diversion programs, and more equitably engage with the University of California on repatriation policies.

We can most effectively address remaining challenges to full equality for Native peoples through a sustained effort to effect real change, built on mutual honesty, communication, and respect.

This month, I encourage everyone in our state to learn more about the people who first called this state and nation home, as we pause to reflect on their past, present, and future.

NOW THEREFORE I, GAVIN NEWSOM, Governor of the State of California, do hereby proclaim November 2019, as “Native American Heritage Month.”

IN WITNESS WHEREOF I have hereunto set my hand and caused the Great Seal of the State of California to be affixed this 20th day of November 2019.