SACRAMENTO – Governor Gavin Newsom and Attorney General Xavier Becerra today presented the Governor’s Public Safety Officer Medal of Valor to two public safety leaders from the San Bernardino County Sheriff’s Department and the San Diego Police Department who went above and beyond the call of duty.

“The brave heroes we honor today, Stephen Miller and Shawn Boggeman, knew the risks, but rushed into danger to save lives, and today, we honor their commitment and dedication to their communities and their selfless acts of courage,” said Governor Newsom. “Their willingness to go above and beyond the call of duty to protect their fellow Californians is an inspiration to all of us.”

“Those who answer the call of public service put their community’s needs ahead of their own every day,” said Attorney General Becerra. “This year’s Medal of Valor recipients, Stephen Miller and Shawn Boggeman, went above and beyond that call of duty, taking on great personal risk to help others. Their bravery was not just life-changing, it was life-saving, and they have more than earned this honor. It is because of the bravery of public safety officers like them that families in California can breathe easier, knowing they have some of the country’s finest men and women looking out for them.” 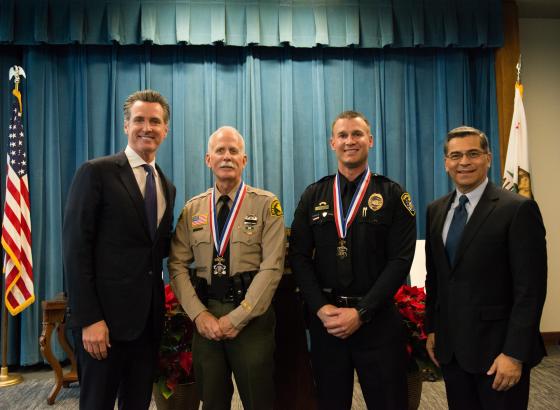 The following individuals were awarded the Public Safety Officer Medal of Valor today:

On February 10, 2018, the San Bernardino Sheriff’s Department helicopter team responded to rescue a woman from the San Gorgonio Mountain. Telma Altoon had slipped on an icy patch and slid about 100-yards off the trail, striking a tree sustaining life-threatening injuries. With no cellular service, her friend hiked several hours before being able to call 911.

Air-Rescue-06 Pilot Sergeant Michael Gilley, Crew Chief Corporal Edward Leon, Citizen Volunteer Stephen Miller, and Reserve Deputy Sheriff Gordon Yee responded for the hoist rescue. Miller and Yee were specifically selected because of their prior ice training and experience. The air temperature was well below freezing. Ms. Altoon had been laying in the same position for 10 hours, afraid that if she moved she would continue sliding down the ice face.

Sergeant Gilley hovered Air-Rescue-06 about 100 feet above Ms. Altoon, as Miller was lowered onto the ice below her. Miller used his ice axe to ascend the ice face, in complete darkness. Just as Miller reached Ms. Altoon, part of the sheer ice face gave way. Miller began sliding down the sheer of ice head first, on his back. After sliding about 100 yards, Miller remarkably was able to use his ice axe to arrest his fall, saving his own life.

Fearing Miller had sustained serious injuries, Leon and Gilley hoisted Miller back onboard. Incredibly, Miller returned for a second attempt to reach Ms. Altoon. Leon skillfully placed Miller next to a tree, which he used to stabilize himself and Ms. Altoon, preventing the helicopter’s downdraft from causing them to fall further down the ice. Miller and Yee assessed Ms. Altoon’s injuries and carefully placed her into a rescue harness. Leon safely hoisted all three into the aircraft. The crew transported Ms. Altoon to medical personnel who transported her to the Loma Linda University Medical Center.

Conducting a rescue using night vision googles is inherently dangerous – the entire crew of Air-Rescue-06 risked their lives that night to save Ms. Altoon. Being hoisted onto an icy slope in the darkness and surviving a fall that could easily have been fatal, Miller demonstrated the extremely treacherous conditions he was willing to face to save Ms. Altoon. For his extraordinary bravery, heroism and courage in the face of imminent and personal life threatening peril, EMT/Paramedic Miller’s actions were above and beyond the call of duty, and exemplify the highest standards of a California public safety officer.

SDFD breached the door from the hallway, allowing police to make initial contact. Unknown to them, the suspect was in possession of an AR-15 rifle and had donned body armor. The suspect fired numerous rounds toward officers and fire personnel. One of the first rounds entered Officer Bihum’s right shoulder, causing him to fall. Officer Roman rushed to his aid, crossing the doorway where the suspect’s rounds were passing. Officer Boggeman placed himself in harm’s way while returning fire on the suspect. He directed Officers Roman and Bihum to stay down.

Officer Roman assisted Officer Bihum onto his stomach and returned fire in an attempt to keep the suspect from advancing into the hallway. As Officer Boggeman continued to fire upon the suspect, officers Bihum and Roman began to crawl toward the north end of the second story interior hallway. As all three officers approached the dead end hallway, Officer Boggeman was able to exit the small exterior window. He perched himself onto an adjacent balcony and continued to fire at the suspect, allowing the fellow officers to exit through a window. Officer Bihum’s duty belt became entangled in the window frame. Fearing officers would be pinned down at the end of the hallway for a prolonged period, Office Boggeman requested a ballistic shield and a long-gun.

Officer Boggeman obtained the shield from Officer Daniel Beam and slid it through the window. Within seconds, a rifle round fired by the suspect penetrated the shield and impacted Officer Roman in the neck. A second round impacted Officer Roman in the shoulder. Though severely wounded, Officer Roman continued to fire back at the suspect. Officer Dominic Aristide put himself in harm’s way to provide Officer Boggeman with a long gun, who then positioned himself over the top of Officers Roman and Bihum. He fired multiple rounds at the suspect. Both severely injured officers were able to escape through a window.

Officer Boggeman remained on the balcony and continued to provide cover and point on the suspect’s apartment until more units and SWAT arrived. Once additional officers arrived on scene, Officer Boggeman helped coordinate a perimeter and tactical response. The suspect was later found deceased in his apartment with numerous wounds. Both injured officers are recovering from their wounds.

For his extraordinary bravery, heroism and courage in the face of imminent and personal life threatening peril, Officer Boggeman’s actions were above and beyond the call of duty, and exemplify the highest standards of a California public safety officer.