SACRAMENTO – Governor Gavin Newsom today issued a proclamation declaring January 23, 2020, as Ed Roberts Day in the State of CaliforniaThe text of the proclamation is below: 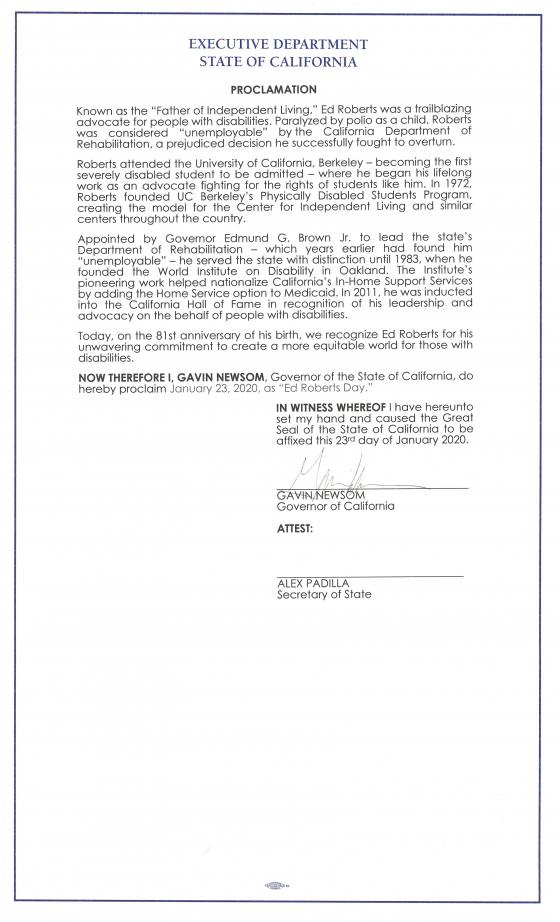 Known as the “Father of Independent Living,” Ed Roberts was a trailblazing advocate for people with disabilities. Paralyzed by polio as a child, Roberts was considered “unemployable” by the California Department of Rehabilitation, a prejudiced decision he successfully fought to overturn.

Roberts attended the University of California, Berkeley – becoming the first severely disabled student to be admitted – where he began his lifelong work as an advocate fighting for the rights of students like him. In 1972, Roberts founded UC Berkeley’s Physically Disabled Students Program, creating the model for the Center for Independent Living and similar centers throughout the country.

Appointed by Governor Edmund G. Brown Jr. to lead the state’s Department of Rehabilitation – which years earlier had found him “unemployable” – he served the state with distinction until 1983, when he founded the World Institute on Disability in Oakland. The Institute’s pioneering work helped nationalize California’s In-Home Support Services by adding the Home Service option to Medicaid. In 2011, he was inducted into the California Hall of Fame in recognition of his leadership and advocacy on the behalf of people with disabilities.

Today, on the 81st anniversary of his birth, we recognize Ed Roberts for his unwavering commitment to create a more equitable world for those with disabilities.

NOW THEREFORE I, GAVIN NEWSOM, Governor of the State of California, do hereby proclaim January 23, 2020, as “Ed Roberts Day.”

IN WITNESS WHEREOF I have hereunto set my hand and caused the Great Seal of the State of California to be affixed this 23rd day of January 2020.