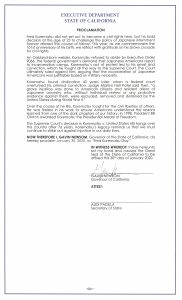 Fred Korematsu did not set out to become a civil rights hero, but his bold decision at the age of 23 to challenge the policy of Japanese internment forever altered the course of history. This year, as we commemorate the 101st anniversary of his birth, we reflect with gratitude on his brave crusade for civil rights.

An Oakland-born welder, Korematsu refused to abide by Executive Order 9066, the federal government’s demand that Japanese Americans report to incarceration camps. Korematsu’s act of protest led to his arrest and conviction, which he fought all the way to the Supreme Court. The Court ultimately ruled against him, arguing that the incarceration of Japanese Americans was justifiable based on military necessity.

Korematsu found vindication 40 years later, when a federal court overturned his criminal conviction. Judge Marilyn Hall Patel said then, “a grave injustice was done to American citizens and resident aliens of Japanese ancestry who, without individual review or any probative evidence against them, were excluded, removed and detained by the United States during World War II.”

Over the course of his life, Korematsu fought for the civil liberties of others. He was tireless in his work to ensure Americans understood the lessons learned from one of the dark chapters of our history. In 1998, President Bill Clinton awarded Korematsu the Presidential Medal of Freedom.

The Supreme Court’s decision in Korematsu v. United States still hangs over this country after 76 years. Korematsu’s legacy reminds us that we must continue to strike out against injustice in our daily lives.

NOW THEREFORE I, GAVIN NEWSOM, Governor of the State of California, do hereby proclaim January 30, 2020, as “Fred Korematsu Day.”

IN WITNESS WHEREOF I have hereunto set my hand and caused the Great Seal of the State of California to be affixed this 30th day of January 2020.