The Governor formally submits his nomination letter for Assemblymember Dr. Shirley Weber to the State Senate President pro Tempore and Assembly Speaker to serve as California’s next Secretary of State

SACRAMENTO – As Americans celebrate the legacy of civil rights icon Dr. Martin Luther King, Jr. and his work to expand voting rights and representation, Governor Gavin Newsom today formally submitted the appointment of Alex Padilla to become California’s first Latino U.S. Senator and the nomination of Assemblymember Dr. Shirley Weber to become the state’s first African American Secretary of State. The announcement comes as Kamala Harris formally resigned her position as U.S. Senator this morning as she prepares to make history by becoming the first African American and woman to become Vice President of the United States when she is inaugurated alongside President-elect Joe Biden Wednesday.

The Governor this morning formally submitted a letter to Senate President pro Tempore Toni Atkins and Assembly Speaker Anthony Rendon nominating Dr. Shirley Weber to fill the Secretary of State vacancy. The Legislature will have 90 days to vote on Dr. Weber’s confirmation.

“It is fitting that on the same day we celebrate the legacy of Dr. Martin Luther King, Jr. — a civil rights icon who fought for justice and representation — we also move forward the appointment of California’s first Latino U.S. Senator Alex Padilla and the nomination of Dr. Shirley Weber who will serve as the first-ever African American Secretary of State. Both will be strong defenders of our democracy during this fragile moment in our nation’s history,” said Governor Newsom. “These appointments are only possible because of the trailblazing leadership of my dear friend and California’s own Kamala Harris, who will move on from the Senate to make history by becoming the first African American and woman to serve as Vice President of the United States. This is a proud day for California.” 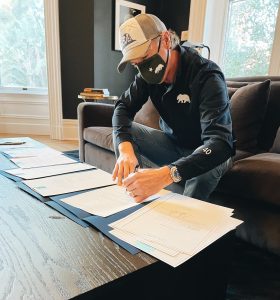 “It has been my privilege and honor to serve the people of California as Secretary of State for the past six years. I am proud of the transformative work we have accomplished in partnership with you, the Legislature, county election officials, voting rights advocates, and community leaders throughout the state to reduce barriers to participation in the electoral process, increase voter registration and participation, and administer safe and secure elections – even during the COVID-19 pandemic. More than 22 million registered voters were able to vote in the 2020 Presidential General Election and a record 17.8 million Californians cast their ballot – demonstrating to the nation a proven model of electoral reform and innovation,” wrote Senator-designate Padilla in his letter to Governor Newsom. “I am humbled and honored by your trust in me to represent California in the United States Senate. I look forward to continuing to serve the great State of California as a United States Senator and to ensuring that the rights and democratic principles we cherish are protected and preserved for all people.”

“Dr. King teaches us that we are at our best when we stand up in service of others and I am humbled to be able to continue to stand up for Californians as Secretary of State. I thank the Governor for formally submitting my nomination to the Legislature today and look forward to lifting up and defending our democratic values of inclusivity and participation in this new role,” said Dr. Weber.

State law empowers the Governor to fill vacancies to the U.S. Senate and, subject to confirmation by the State Senate and Assembly, the Secretary of State. Governor Newsom announced his selection of Padilla and Dr. Weber in December.

A copy of Senator Padilla’s Certificate of Appointment, signed at 9:05 a.m. PST after Senator Harris’ resignation became effective at 9:00 a.m. PST, can be found here, and the text can be found here.