“California is holding corporations accountable and recognizing the dignity and humanity of our workers, who have helped build the fifth-largest economy in the world,” said Governor Newsom. “These measures protect marginalized low-wage workers, many of whom are women of color and immigrants, ensuring they are paid what they are due and improving workplace conditions. We are committed to having their backs as we work to build a stronger, more inclusive economy.” 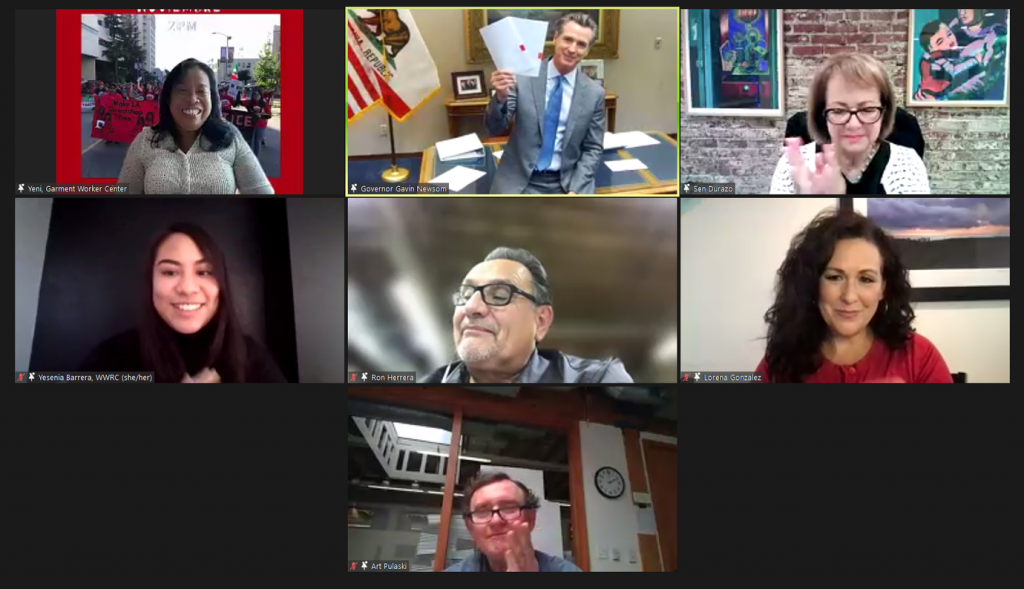 “Today we won justice for garment workers,” said Senator Durazo. “For too long, bad-actor manufacturers have exploited garment workers toiling in unsanitary conditions for as little as $5 an hour. I applaud Governor Newsom for signing this important legislation to safeguard legal wages and dignified working conditions for this highly-skilled workforce and level the playing field for ethical manufacturers that are doing the right thing.”

Governor Newsom today also signed SB 321 by Senator Durazo, under which Cal/OSHA will create an advisory committee to recommend state policies to protect domestic workers and to provide health and safety guidance to educate employers and employees in the industry. SB 639 by Senator Durazo prohibits employers from paying workers with disabilities less than the California minimum wage by phasing out certificate programs that permit subminimum wages for these employees.

Holding employers accountable, AB 1003 by Assemblymember Lorena Gonzalez (D-San Diego) makes the intentional theft of wages, benefits or compensation in an amount greater than $950 for one employee or more than $2,350 for two or more employees in a consecutive 12-month period punishable as grand theft, which prosecutors could charge as a misdemeanor or felony.

Governor Newsom also signed AB 73 by Assemblymember Robert Rivas (D-Hollister), legislation helping to protect farmworkers from wildfire smoke by including agricultural workers in the definition of essential workers that can access the state’s personal protective equipment (PPE) stockpile and specifying that wildfire smoke events are among the health emergencies that require the state to mobilize distribution of PPE. It also requires employers to provide in-language wildfire smoke training.

A full list of the bills signed by the Governor is below:

For full text of the bills, visit: http://leginfo.legislature.ca.gov