“Today marks another step toward healing and justice for all,” said Governor Newsom. “Too many lives have been lost due to racial profiling and excessive use of force. We cannot change what is past, but we can build accountability, root out racial injustice and fight systemic racism. We are all indebted to the families who have persevered through their grief to continue this fight and work toward a more just future.” 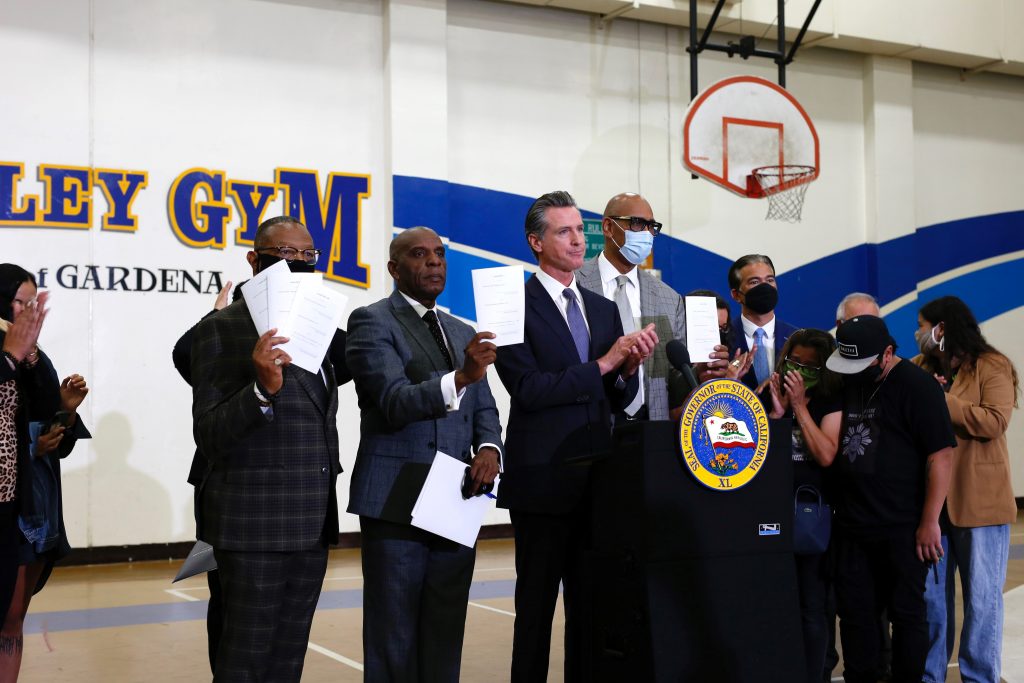 “Today is an important day. It’s an inflection point in how we provide for public safety in the State of California,” said California Attorney General Rob Bonta. “I’m proud to stand with my former colleagues and Governor Newsom to embark on a new chapter in our shared fight to infuse our criminal justice system with more trust, transparency, and accountability. By building trust today, we are ensuring officer and community safety for tomorrow. Trust generates safety and safety generates trust. It will take sustained work by all of us to get the job done, but this is a monumental step forward on the path toward justice.”

“I am proud of the important progress the Legislature and Governor have made this year to help make sure people of color in California can be safer in their dealings with law enforcement. No one should have to fear those who are sworn to protect them,” said Senate President pro Tempore Atkins. “My colleagues in both houses who worked tirelessly for these bills, and the family members, community advocates, and responsible law enforcement leaders who helped get the bills across the finish line all deserve our thanks. There is more work to do, and we are already back at it. Four hundred years of racism won’t be erased overnight—but the arc is bending and the moral momentum is on our side.”

“California has one of the most progressive criminal justice systems in the nation,” said Senator Bradford. “But for too long, problematic officers that commit heinous acts in one department are either not held accountable and continue to be a problem for that community, or are punished, but able to find employment in another department. This rinse and repeat style of accountability has led to the continuous erosion of community trust. At long last, California finally joins the 46 other states with processes for the decertification of bad officers. I’m proud to have authored this landmark bill for California, which honors Kenneth Ross Jr. and the many others who have had their lives taken by police who abuse their power. My deep appreciation goes out to the families, community organizations, advocates and legislators who were willing to stand up and support this positive change. I applaud Governor Newsom for standing with us on this issue and look forward to working with the Administration on more ways to improve public safety and rebuild public trust in our law enforcement system.”

“Trust in law enforcement erodes when police misconduct is kept secret and officers who’ve acted badly are allowed to avoid consequences,” said Senator Skinner. “SB 2 and SB 16 will help restore public trust in California policing. By signing these bills, Governor Newsom has ensured that police who commit serious misconduct will no longer have the privilege of wearing a badge and that we, the public, have the right to know when officers use excessive force or engage in racist or biased behavior.”

Governor Newsom also signed AB 26 by Assembymember Chris Holden (D-Pasadena) which creates guidelines for police officers to intercede and immediately report if another officer is using excessive force; AB 89 by Assemblymember Reggie Jones-Sawyer (D-Los Angeles) which raises the minimum age to become a police officer to 21 and will enhance education requirements; and AB 490 by Assemblymember Mike Gipson (D-Carson) which bans technique and transport methods that involve risk of positional asphyxia.

A full list of the bills signed by the Governor is below:

Governor Newsom last year signed a series of bills into law initiating critical criminal justice, juvenile justice and policing reforms in California, including banning the carotid restraint, requiring the Attorney General to conduct investigations into officer-involved shootings of unarmed individuals that result in death and legislation that reforms the juvenile justice system to put more emphasis on rehabilitation and education. The Governor last year also released recommendations from his policing advisors for improving police response to protests and demonstrations and directed the statewide Commission on Peace Officer Standards and Training (POST) to modernize training and guidance for law enforcement.

For full text of the bills signed today, visit: http://leginfo.legislature.ca.gov