LOS ANGELES – At the Ports of Los Angeles and Long Beach today, Governor Gavin Newsom highlighted the ongoing work to address the global supply chain crisis, including policies to help ease congestion and alleviate backlogs. The Governor was joined by Port Envoy to the Biden-⁠Harris Administration Supply Chain Disruptions Task Force John D. Porcari, ILWU International President Willie Adams, port leadership, local legislators and elected officials. The combined actions of government, labor, port operators and the private sector have resulted in a 32% drop in containers sitting on dock for more than nine days in the Ports of Los Angeles and Long Beach.

“Major changes in consumer habits driven by a global pandemic have led to all-time record high volumes of containers moving through Los Angeles and Long Beach ports. Thanks to the collective work of California and our partners, we have seen a 32% drop in containers sitting on the docks,” said Governor Newsom. “California has taken swift action across the board to address congestion and increase our capacity to move goods quickly. I am grateful for the cooperation of both the public and private sectors – from the federal government to the ports, the workforce, the retailers and the shipping lines – for the additional commitments they’ve made to tackle the backlog.”

To support these efforts to keep goods moving and lessen backlogs, last month Governor Newsom and the U.S. Department of Transportation announced a strategic partnership to help facilitate innovative projects and financing opportunities for multi-billion infrastructure improvements in California, including providing up to $5 billion for our ports and supply chain infrastructure. In addition, the Ports of Los Angeles and Long Beach and International Longshore and Warehouse Union (ILWU) workers committed to a shift towards 24/7 operations in the coming months.

Just last week, maritime industry stakeholders announced a new and more environmentally friendly queuing policy, in which vessels will be assigned a queue spot at their port of last call. The port is also utilizing sweeper vessels to support the movement of empty containers. Over the last weekend, carriers loaded out about 10,000 of the remaining 72,000 containers, with additional sweeper vessels coming in the next few weeks. Port Envoy Porcari has also been leading thrice weekly meetings with terminal operators, shipping lines and other key stakeholders to identify operational problems and immediate solutions at the two ports.

“Many of the biggest challenges our ports are facing today have been years in the making,” said Port Envoy Porcari. “I am grateful for California’s partnership and dedicated focus to produce outcomes that will reduce congestion, improve operations and set us on a sustainable path for the future.” 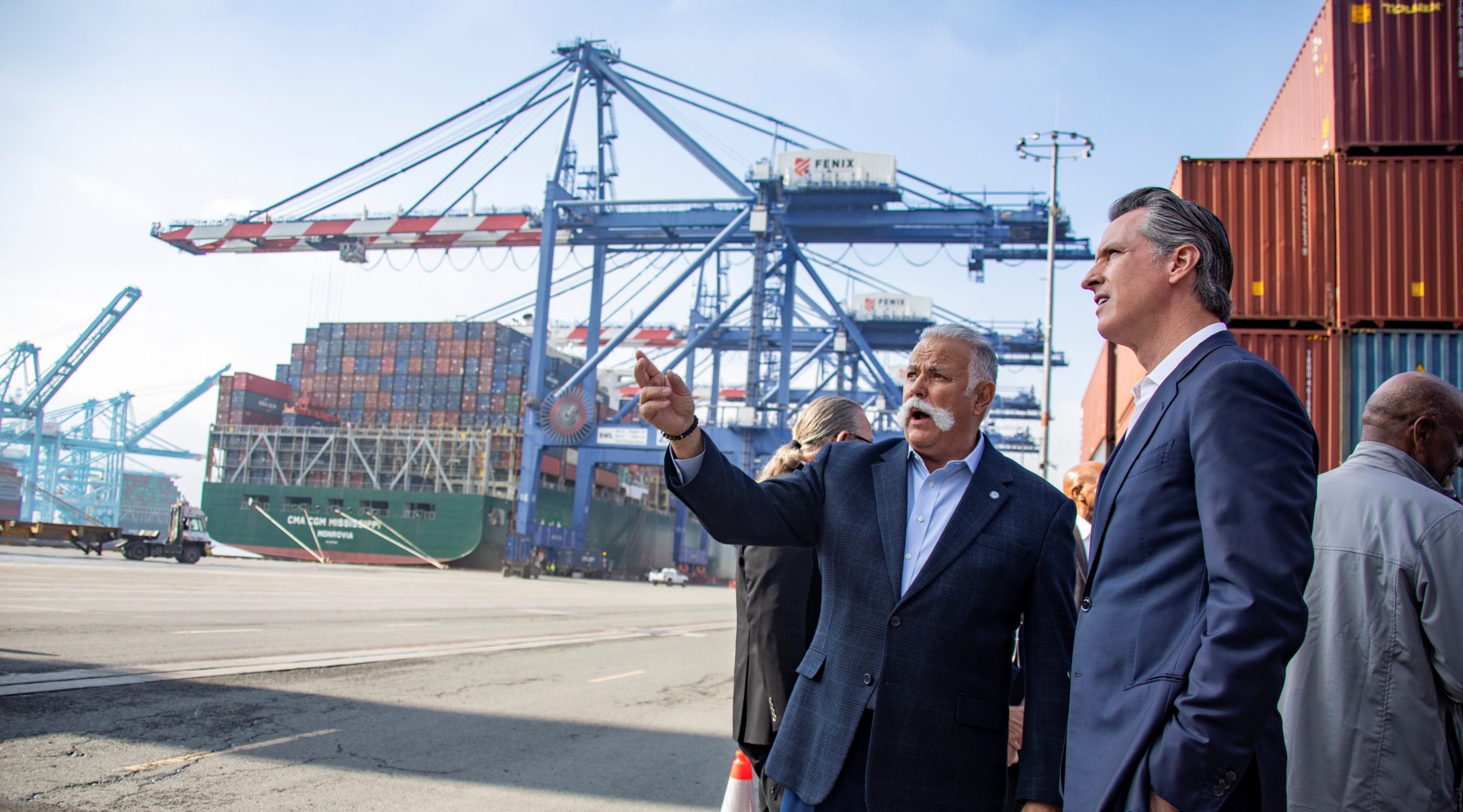 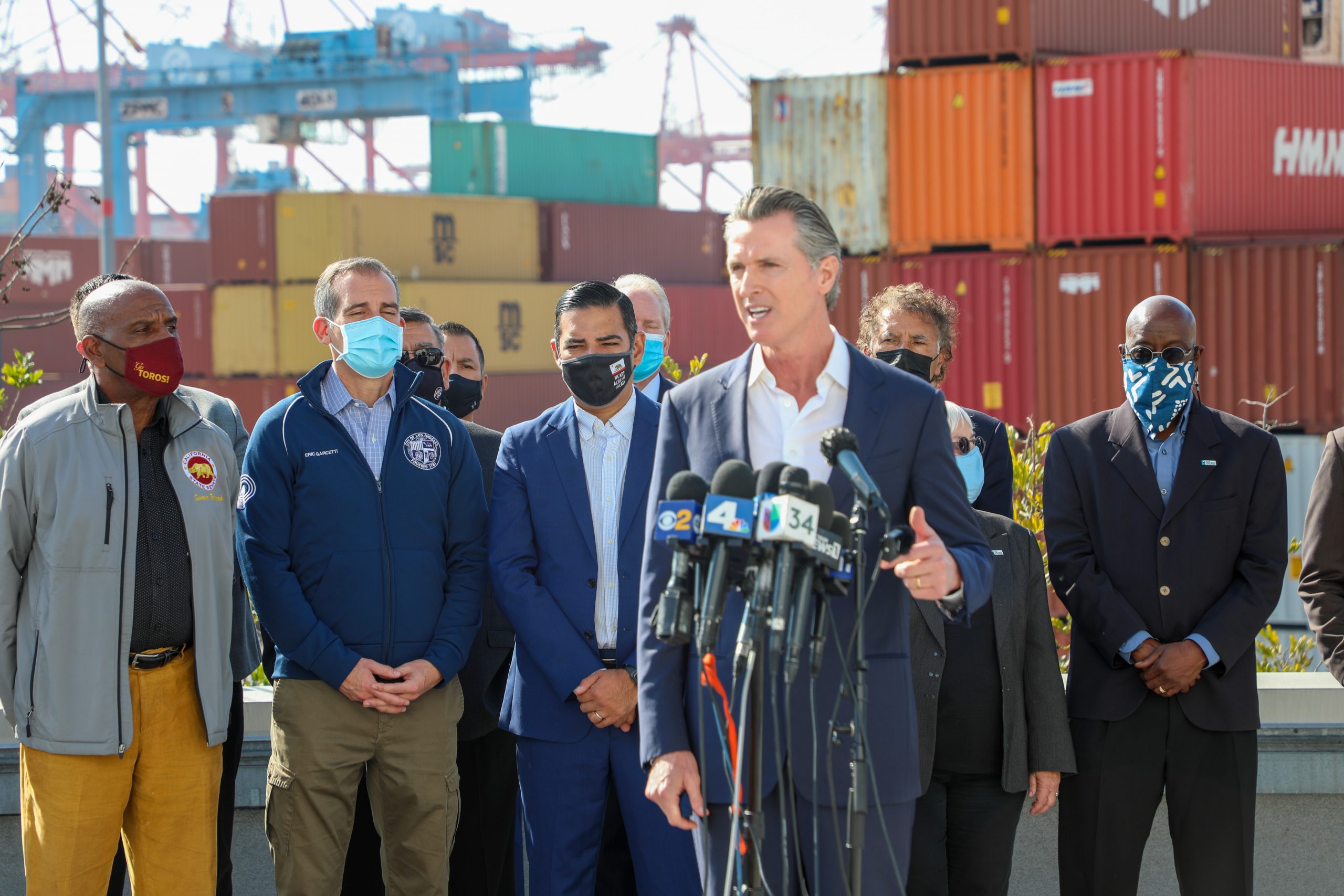 California is home to the two busiest ports in the United States, Los Angeles and Long Beach, that together process more than 40% of the containers arriving on our nation’s shores. Over the last two weeks at the Ports of Long Beach and Los Angeles, there has been a 32% decrease of containers that have been sitting on the docks for nine days or more.

“The men and women of the ILWU have been working hard every day during the pandemic to keep America’s shelves stocked, and we appreciate the efforts of the federal and state governments to move cargo off of the docks and throughout the supply chain,” said Willie Adams, ILWU International President. “These efforts are critical to allowing dockworkers the room we need to continue moving cargo off of ships.”

California port workers have processed 211 million cargo containers since 2010, 2.9 times more than any other state. These ports have moved 17% more containers between January and mid-October than they did in 2018, which held the previous record.

Building on his October executive order and federal partnership to address the global supply chain crisis, Governor Newsom today announced that Caltrans will begin issuing temporary permits allowing trucks to carry heavier loads of up to 88,000 pounds on State Highway and Interstate routes between the Ports of Los Angeles, Long Beach, and other statewide ports, and distribution centers throughout the state. The application process to go beyond the current 80,000-pound limit will begin November 19, while cities and counties can issue their own permits for travel on local roads.

Today’s announcements follow the Newsom Administration’s earlier action to keep goods moving quickly, including nearly doubling the Department of Motor Vehicles’ capacity to conduct commercial driving tests in the coming months to address the national shortage of workers in the industry, launching a multi-agency Supply Chain Task Force to implement the executive order and identify additional measures to support goods movement, and working to find opportunities with interested parties on leasing state and privately owned land for container storage space.

The Governor’s executive order also directs the Department of Finance to work with state agencies to develop longer-term solutions that support port operations and goods movement for consideration in the state budget, which may include port and transportation infrastructure improvements, electrification of the goods movement system from port to delivery and workforce development. The order builds on earlier efforts this year by the Governor’s Office of Business and Economic Development (GO-Biz) and the California State Transportation Agency to ease supply chain issues by engaging the diverse network of stakeholders along the supply chain to discuss key challenges and identify solutions.