LOS ANGELES – Revisiting the former dumping site in South Los Angeles where he unveiled his $1.1 billion Clean California initiative earlier this year, Governor Gavin Newsom today joined state and local officials at a ribbon cutting ceremony for the new mini park project completed at the site and highlighted the progress underway to revitalize streets and public spaces across the state.

Launched by Governor Newsom as part of his California Comeback Plan, Clean California invests $1.1 billion for state and local governments to clean up trash and debris statewide, beautify community gateways and public areas along highways, streets and roads and provide good jobs to thousands of Californians. Over three years, Clean California will remove an additional 1.2 million cubic yards, or 21,000 tons, of trash from the state system alone – enough to fill the Rose Bowl three times over.

“A little over seven months ago, I was here picking up trash myself – everything from mattresses to needles. Now looking at this space, we see what’s possible with real investments and hard work, and it’s something we are replicating throughout the state,” said Governor Newsom. “This is an amazing example of what can be done with serious investments in California’s future. Folks across the state will see and feel the difference as Clean California starts to take root – we are cleaning up our state.”

Before and after images and b-roll of the transformation can be found here. 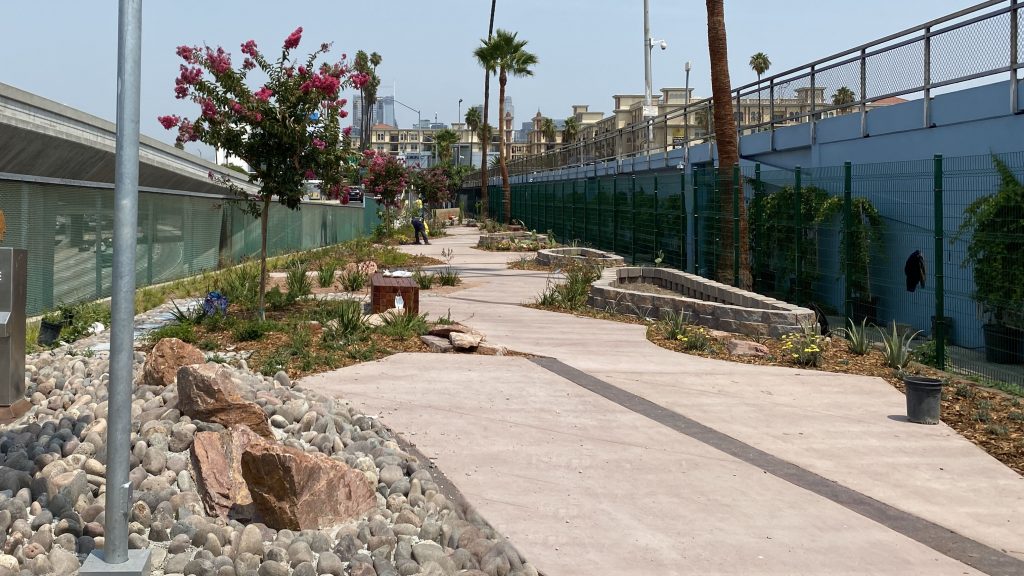 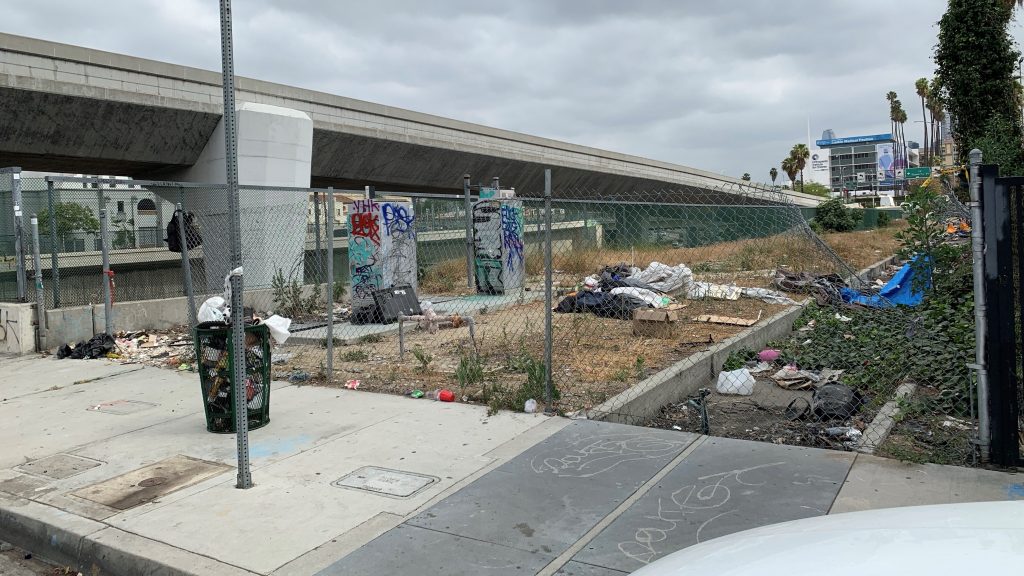 Before and after of former dumping spot along Interstate 110 and 28th Street in South Los Angeles.

“This first of its kind park transformation project under the Clean California effort demonstrates the speed at which we can make improvements,” said Caltrans Director Toks Omishakin. “It shows how quickly a community can come together and envision low maintenance and beautiful improvements in a small space. It is an example of further greening all of Los Angeles.”

Clean California has already resulted in 4,500 tons of litter removed from the State Highway System – the equivalent of 83 Olympic-size swimming pools. Caltrans has also hosted 24 bulk item “Dump Days” throughout the state, collecting 3,500 cubic yards of litter and 2,500 tires, and recycling 850 mattresses.

Later in the day, Governor Newsom participated in a Clean California Caltrans litter pick-up along the 101 freeway near Dodger Stadium, helping Caltrans crews remove hundreds of pounds of trash from abandoned encampments and illegal dumping activities. This site was one of multiple Clean California sites targeted for clean-up today as part of a daylong, region-wide blitz organized by the Caltrans District office. 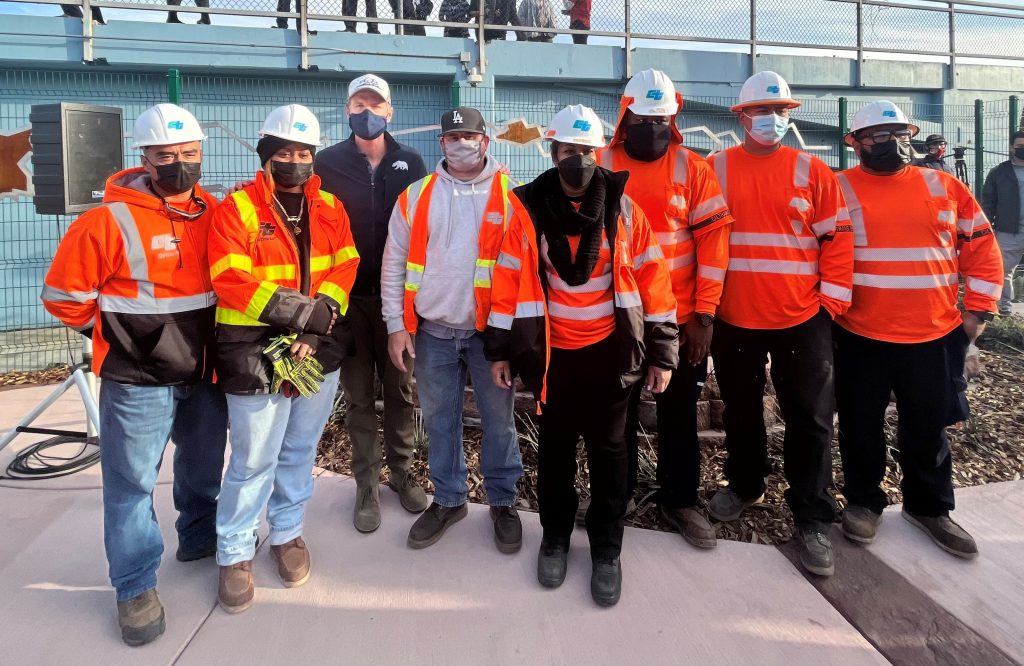 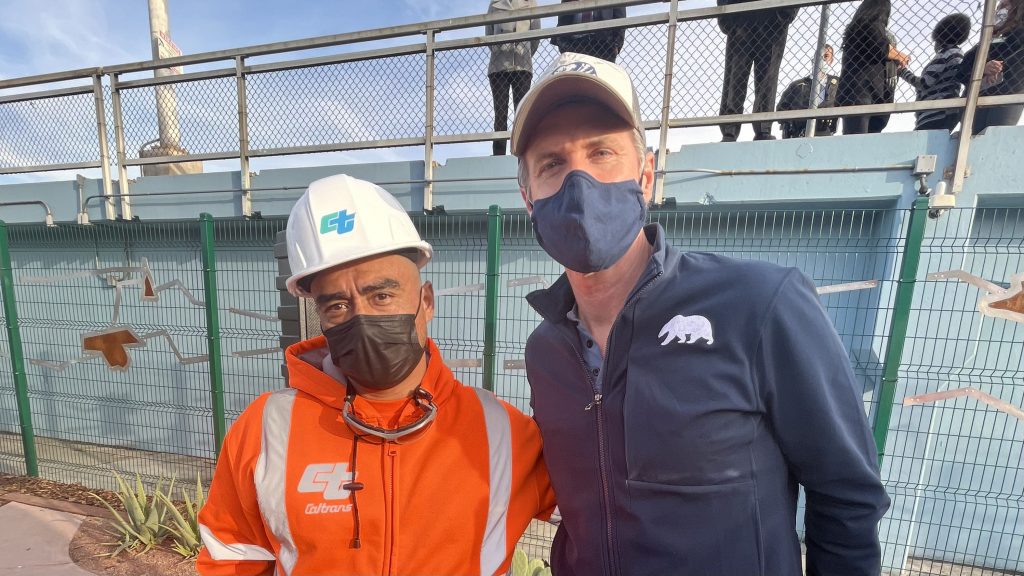 Last week, Caltrans announced a $300 million grant program where California cities, counties, transit agencies, tribal governments and other governmental entities can submit proposals of up to $5 million to beautify their communities and address trash and debris. Among other examples, Caltrans will consider projects that remove litter on city streets, create a marker on a thoroughfare entering a town or neighborhood, beautify an area through greening or landscaping, or facilitate cultural connections and civic pride within a community. The department plans to announce grant recipients on March 1. Today, the Governor announced a proposed $100 million increase to the local grant program as part of the upcoming budget.

“We sought community input into these improvements, and their design has evolved the neglected space into something that speaks to the community pride – with native plants, lighting, benches, and artwork and a concrete pathway reflecting the land grant mapping of Los Angeles – while providing a low-maintenance space,” said Caltrans District Director Tavares.

The $2.2 million South Los Angeles project was completed with funds from the State Highway Operation and Protection Program, Highway Maintenance Program and Clean California, for beautification work. The project was designed by the Design One Group in coordination with LA Trade Tech professors and students envisioning the improvements with GIS-based mapping. Artist Álvaro Márquez created the land grant mapping steel art pieces.

More information on how Clean California is transforming communities can be found here.