SACRAMENTO – In a virtual ceremony today, Governor Gavin Newsom and California Attorney General Rob Bonta presented the Governor’s Public Safety Officer Medal of Valor to Lodi Police Department Officer Erika Urrea, who went above and beyond the call of duty while saving the life of a fellow Californian.

“California is at its best when we look out for one another, and Officer Urrea’s heroic and lifesaving action is an inspiring example to all of us,” said Governor Newsom. “It is an honor to recognize her incredible bravery today and thank her for her unwavering commitment to the people of this state.”

Click here for video of the virtual ceremony today.

“The Medal of Valor is the highest honor our state can give to a public safety officer, recognizing those on the frontlines who go above and beyond the call of duty,” said Attorney General Rob Bonta. “Officer Erika Urrea went above and beyond. On what was a normal summer day, her brave actions were anything but the norm when she demonstrated great courage — in the face of great danger — by rescuing a fellow citizen from the brink of life-ending tragedy. Her valor represents the very best of the California spirit.” 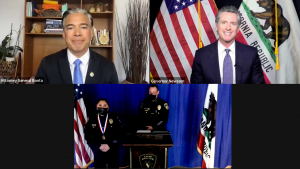 On August 12, 2020, Officer Urrea was driving on East Lodi Avenue when, as she crossed the railroad tracks, she noticed that Jonathan Mata appeared to be struggling with his electric wheelchair on the tracks. Officer Urrea made a U-turn and exited her patrol vehicle to aid Mata. As she did so, the railroad crossing arms lowered and the signals began to sound as a 250-ton freight train rapidly approached them. Officer Urrea ran to Mata and, realizing the chair would not move, managed to pull him away from the tracks just as the train passed. The train struck Mata in the leg, injuring him. They were both pushed back by the force of the train hurtling by.

Mata was transported to San Joaquin General Hospital for treatment and later released. Without Officer Urrea being alert to her surroundings and quickly responding with no regard for her own safety, Jonathan Mata would have surely been a casualty that day. For her extraordinary bravery, heroism and courage in the face of imminent and personal life-threatening peril, Officer Erika Urrea’s actions were above and beyond the call of duty, and exemplify the highest standards of a California public safety officer.