A bill that will be introduced by Senator Hertzberg today will enable private citizens to hold the gun industry accountable through civil litigation, and AB 1594 would allow individuals and the Attorney General to sue firearm manufacturers and sellers

DEL MAR – Alongside California Attorney General Rob Bonta, legislators and local leaders, Governor Gavin Newsom today announced a new package of meaningful gun safety legislation to expand the state’s nation-leading protections against gun violence. The package includes a measure the Governor called for in December to help hold the gun industry accountable through private lawsuits, and a bill that would prohibit advertising of certain categories of weapons to children.

“California will continue to lead the fight to end gun violence with bold action to tackle the national crisis putting millions of Californians at risk,” said Governor Newsom. “It’s time to go on the offensive with new measures that empower individuals to hold irresponsible and negligent gun industry actors to account, crack down on shameful advertising that targets our kids and more. This is not about attacking law-abiding gun owners – it’s about stopping the tragic violence ravaging communities across the country.” 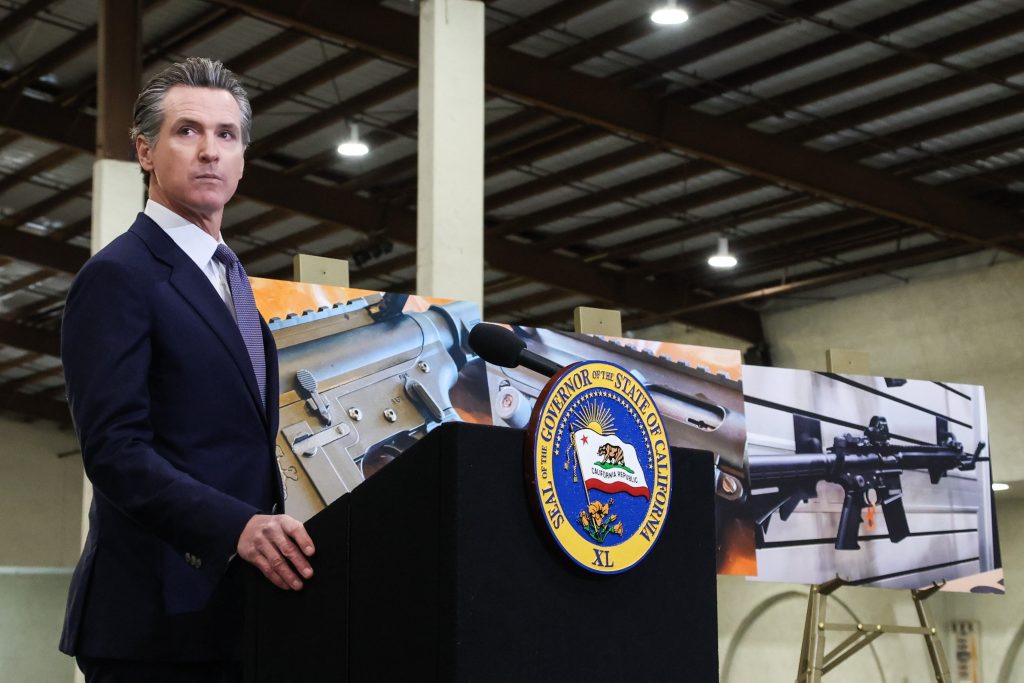 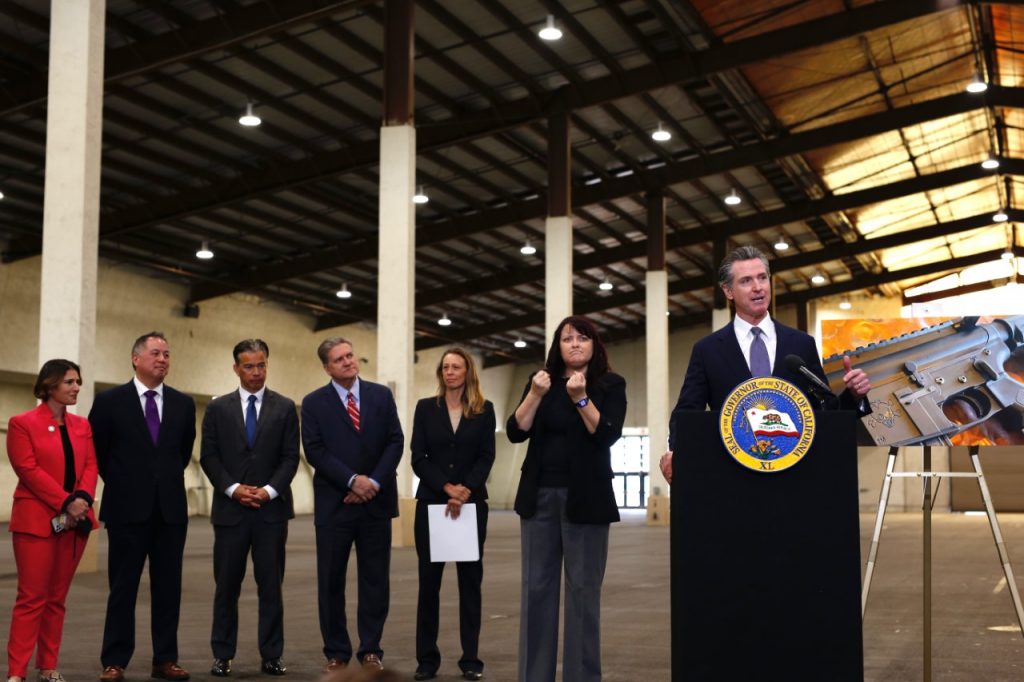 Governor Newsom announces gun safety package at Del Mar Fairgrounds, where the sale of firearms and ammunition was prohibited under legislation he signed into law in 2019.

Following the U.S. Supreme Court’s decision allowing Texas’s ban on most abortion services to remain in place, Governor Newsom directed his Administration to work with the Legislature to propose a measure like the bill that will be introduced by Senator Robert Hertzberg (D-Van Nuys) today, modeled on the structure of Texas’s abortion law. The bill would allow private citizens to sue anyone who manufactures, distributes, transports, imports into the state or sells assault weapons, .50 BMG rifles, ghost guns, or ghost gun kits.

“In a just world, a woman’s right to choose would be sacrosanct, and California’s people would be protected from ghost guns and assault weapons. Sadly, a misguided Supreme Court decision has turned common sense on its head. With this bill, we take advantage of the Court’s flawed logic to protect all Californians and save lives,” said Senator Hertzberg.

Also included, AB 1594 by Assemblymembers Philip Ting (D-San Francisco), Mike Gipson (D-Carson) and Christopher Ward (D-San Diego) would allow individuals and the California Attorney General to sue manufacturers and sellers of firearms for the harm caused by their product. In 2005, Congress passed the Protection of Lawful Commerce in Arms Act, which shields gun manufacturers and dealers from civil suits when crimes are committed using the guns they produce. AB 1594 utilizes an exemption to the federal statute that allows gun makers or sellers to be sued for violations of state laws concerning the sale or marketing of firearms.

“No industry should get a special exemption from protecting their customers, but especially not an industry responsible for the deaths of thousands of Americans every year,” said Attorney General Bonta. “In 2005, the federal government stripped Americans of the right to hold gun manufacturers and distributors responsible for the damage their conduct causes when their products are used unlawfully – leaving only a narrow exception for such lawsuits. Today, using that exception, we begin the process of restoring these rights in California. AB 1594 requires the gun industry to take reasonable steps to make sure their products are not used unlawfully. If the gun industry ignores this responsibility – one that is common for companies in nearly every industry in the country – this bill gives victims and their families an additional legal pathway for holding the firearm industry financially responsible.”

“We must make our communities safer. Almost every industry in the United States can be held liable for what their products do, but the gun industry is not held to the same standard. Financial repercussions may finally push them to be more responsible by improving their practices and adhering to California’s strict gun laws,” said Assemblymember Ting.

“The U.S. has less than 5 percent of the world’s population, yet we make up nearly a third of the world’s mass shootings,” said Assemblymember Ward. “This is a public health crisis that the federal government has continually failed to address. California must take action and hold irresponsible, reckless and negligent gun manufacturers, distributors and sellers accountable.”

The Administration also worked closely with the Legislature to introduce AB 2571 by Assemblymember Rebecca Bauer-Kahan (D-Orinda), which proposes to identify certain categories of weapons, for example, semi-automatic weapons or firearms of a certain caliber, that cannot be marketed to minors under any circumstances. In addition, Governor Newsom highlighted AB 1621 by Assemblymember Gipson to further restrict ghost guns in California by bringing the state into compliance with a proposed new federal rule that would cause many gun kits and “80 percent receivers” to be regulated the same as fully functional firearms and finished receivers. Under the legislation, these couldn’t be sold without a serial number or without the buyer undergoing a background check.

“Gun manufacturers view our children as their next generation of customers, and target them with slick and manipulative advertising. The advertising for these weapons is shameless. Children in California are not allowed to buy or own a gun, yet they are advertised across all forms of media with cartoons, video games, and social media. I’m proud to stand with Governor Newsom on these important reforms – enough is enough,” said Assemblymember Bauer-Kahan.

“Even before the pandemic, stories from families of gun violence have kept me up at night. My own son and his fiancé were victims… and this issue has only gotten worse. In the community of Watts which I represent, there were 22 homicides from January through November of 2020, nearly double the number from the year before,” said Assemblymember Gipson. “For communities alike, gun violence is our wildfire that we work diligently trying to contain. And the casualties are our babies, sisters, brothers, friends and acquaintances – all deserving of life but were cut short of their potential. To say that this issue is personal to me is an understatement, and sending thoughts and prayers just isn’t enough. AB 1621 seeks to eradicate ghost guns from our streets, and this effort is nothing short of a lifesaving, common sense approach toward providing justice for families who have continued to bear the burden of losing a loved one through incidents that could have otherwise been prevented. We need the comprehensive reform which each bill in this package together aims to provide – this is wholeheartedly about saving lives, and nothing less.”

The Governor’s proposed Real Public Safety Plan would create a new statewide gun buyback program to provide matching grants and safe-disposal opportunities to get guns off our streets, and includes additional funding for California’s gun violence research center at the University of California, Davis.

California pioneered statewide gun safety protections, approved by voters in Proposition 63, to ban possession of large-capacity ammunition magazines and require background checks to keep ammunition out of the hands of dangerous people. Since assuming office, Governor Newsom has signed multiple bills aimed at reducing gun violence, including strengthening gun violence restraining orders, regulating the sale of firearms and ammunition and accelerating the regulation of ghost guns. The 2021 state budget invested $200 million in the CalVIP program, which supports initiatives designed to break the cycle of violence in disproportionately impacted communities. The budget also provided $11 million to facilitate outreach, education and training efforts related to gun violence restraining orders and $10.3 million for local law enforcement agencies to support the seizure of firearms from individuals prohibited from possessing them.