SACRAMENTO – Following the U.N. Intergovernmental Panel on Climate Change’s latest report on the essential actions needed to combat the climate crisis and how much time we have left to avert disaster, California today released an annual report showing that the California Climate Investments program continues to lead the way to a low-carbon and more equitable future – with 2021 alone seeing the implementation of more than $2.1 billion in greenhouse gas-reducing projects. To date, $18.3 billion has been appropriated for the statewide initiative that puts Cap-and-Trade dollars to work reducing GHG emissions, strengthening the economy, and improving public health, with nearly $10.5 billion in implemented projects.

From December 2020 through November 2021, more than 75,000 new California Climate Investments projects were launched, delivering significant environmental, economic, and public health benefits across the state. The program continues to direct a significant amount of funding to disadvantaged communities and low-income communities and households, known as priority populations. In 2021, more than $1 billion in funding was directed to projects benefiting priority populations. To date, almost $5.2 billion has reached these communities – or more than half of all project investments.

“California continues to lead the way in confronting the sources of emissions that are driving the climate crisis, while bolstering resilience in our most vulnerable communities,” said Governor Gavin Newsom. “These investments are reducing emissions across our state with projects that provide incentives for zero-emission vehicles and equipment, increase mobility through transit, build resilience to wildfires, and much more. We’re committed to ensuring that the communities most burdened by air pollution share in these benefits, with cleaner transportation options, cleaner air, increased energy efficiency, and more livable communities.”

California Climate Investments projects implemented in 2021 will reduce greenhouse gas (GHG) emissions by nearly 10 million metric tons of carbon dioxide equivalent over the course of their lifetimes, equivalent to taking about a million cars off the road for a year. These outcomes and more are detailed in the latest California Climate Investments Annual Report on the use of auction proceeds from the state’s Cap-and-Trade Program.

More than 560,000 projects have been funded since the first California Climate Investments appropriations were made in 2014, with projects implemented to date expected to reduce GHG emissions by nearly 76 million metric tons of carbon dioxide equivalent over project lifetimes, not including an additional 102 million metric tons that are expected from the first 50 years of the High-Speed Rail Project’s operating life.

Californians statewide are benefiting from investments in fire prevention, affordable housing, clean transportation, air pollution reduction and other projects. To date, California Climate Investments projects have helped plant more than 170,000 trees in urban areas; funded more than 8,900 affordable housing units and 850 transit projects that expand or add bus and rail service; and conserved or restored more than 720,000 acres of land across the state. Projects are reducing fossil fuel use in cars, trucks and off-road equipment by more than 700 million gallons and have provided nearly 420,000 vouchers for electric and plug-in hybrid vehicle purchases statewide. 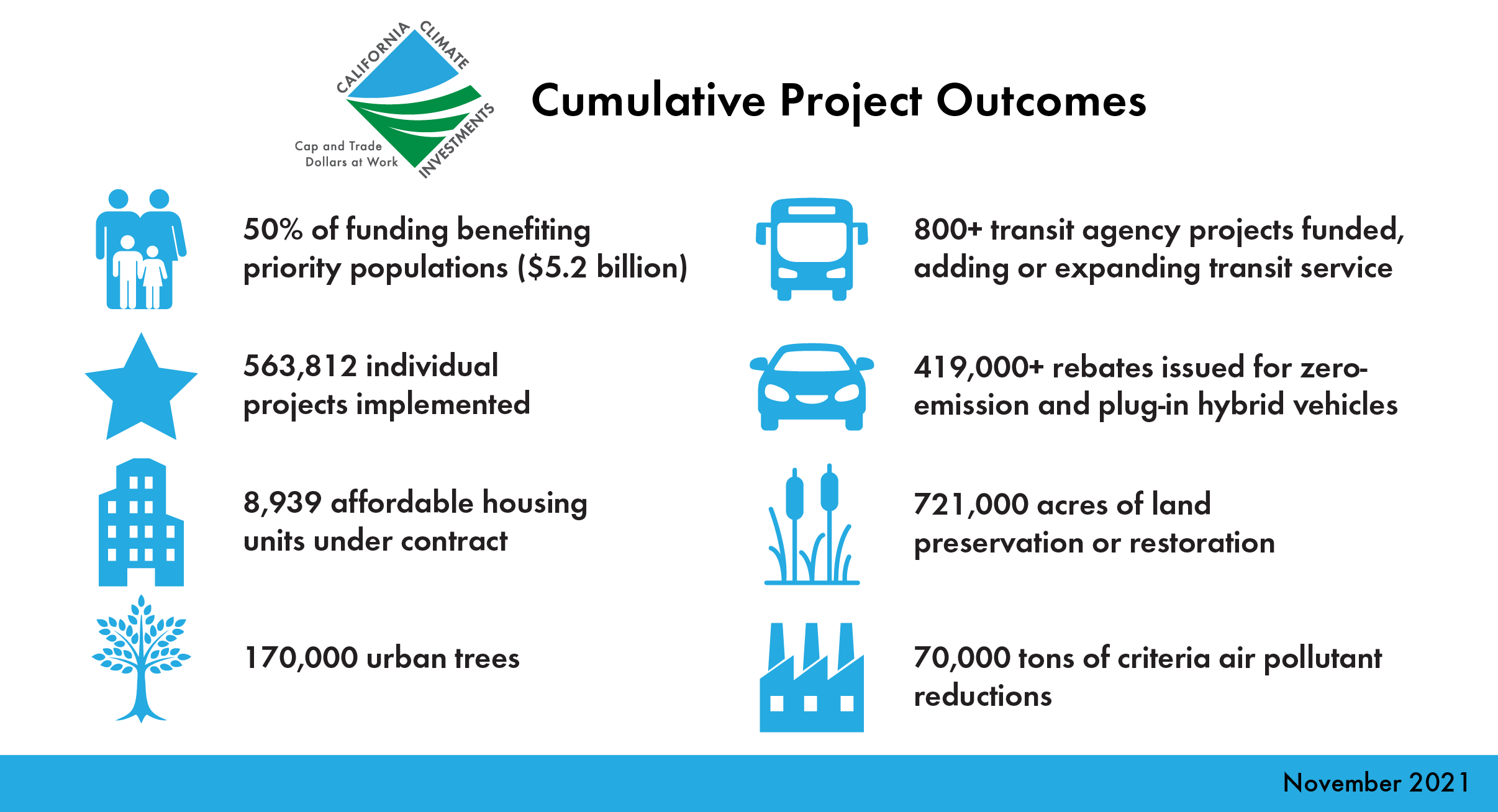 California’s Cap-and-Trade Program has raised $19.2 billion dollars since compliance began in 2013. The state’s share of Cap-and-Trade auction proceeds are placed in the Greenhouse Gas Reduction Fund, then appropriated by the Legislature and distributed as California Climate Investments. That money is then awarded to individual projects selected by more than 20 different state agencies.

Together with the report released today, the California Air Resources Board released an updated interactive map of each implemented project in the state with filters for programs, counties or legislative districts, and additional project-level information for each investment. The Board also released a Project Profiles Map, a new way to explore where projects featured in project profiles are located across the state, and filter by agency, program, county and publication year. The Annual Report, companion materials, map, data dashboard and project list are available at the California Climate Investments website.