SACRAMENTO – With the country still reeling from the mass shooting in Uvalde, Texas that left 19 children and two teachers dead last week, California’s nation-leading record on gun safety provides a pathway for states seeking to rein in gun violence.

Since Early 1990s, California Cut Its Gun Death Rate in Half 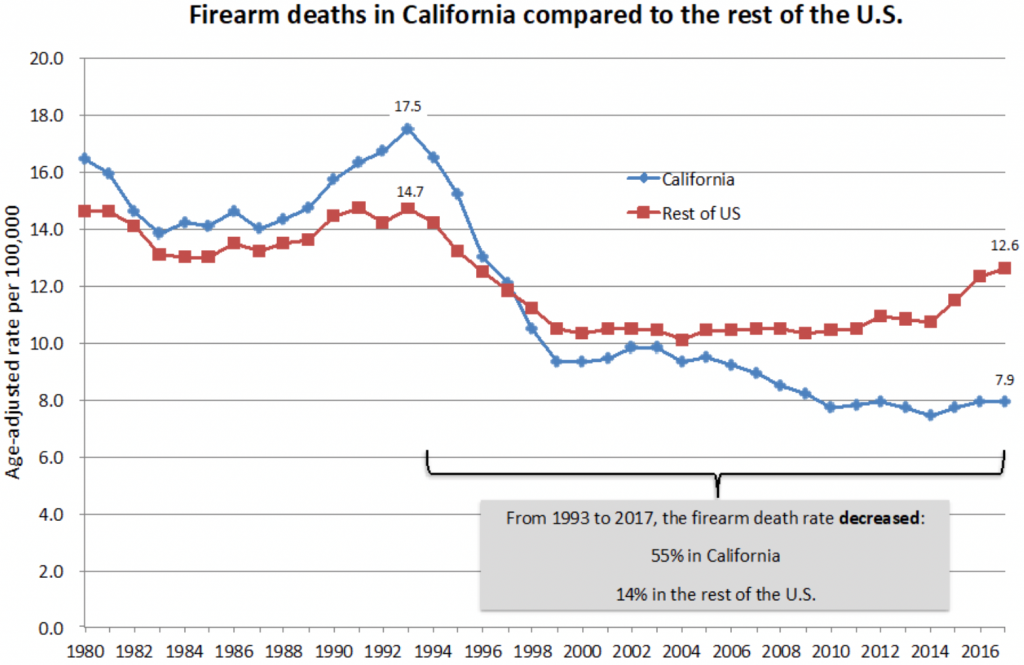 Californians 25% Less Likely to Die in a Mass Shooting
From the Public Policy Institute of California (PPIC): “Compared to citizens of other states, Californians are about 25% less likely to die in mass shootings. Between 2019 and 2021, the state’s annual mass shooting homicide rate of 1.4 per one million people was lower than the national average of 1.9.” 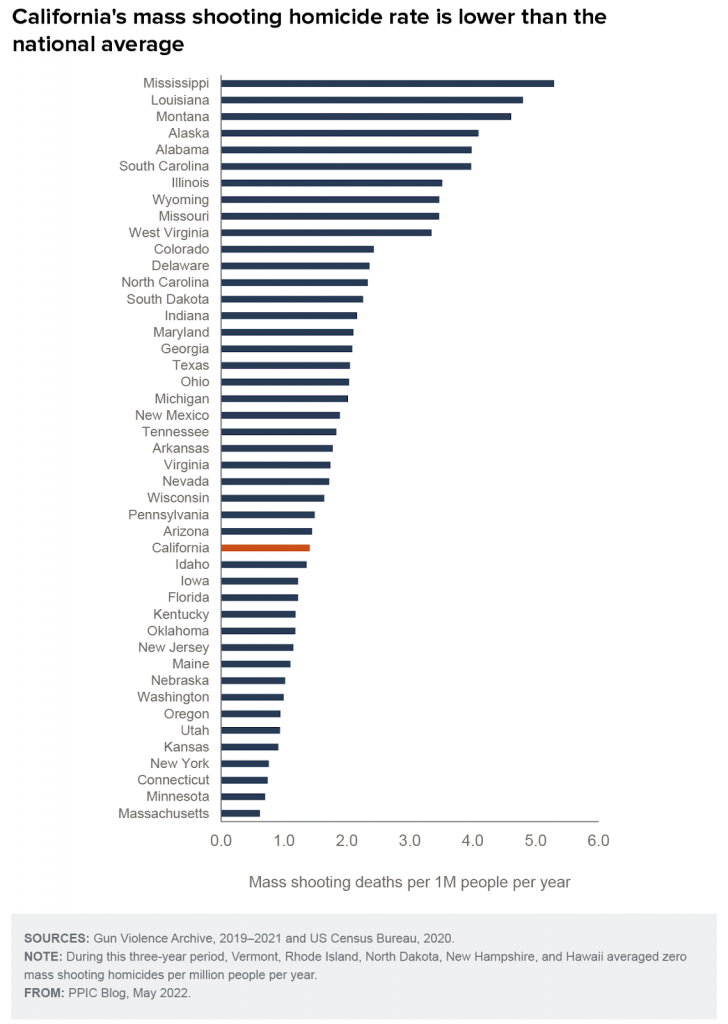 ICYMI, Via The Mercury News: California laws would have ensnared Texas school gunman
“California still has its share of mass shootings, with three just this month, including last week in East Palo Alto where a shootout at a park killed one and injured three. But the gunman who slaughtered 19 school kids and two teachers in Uvalde couldn’t have walked into a sporting goods store in California shortly after turning 18 and left with a military-style AR-15 rifle, as he reportedly did in Texas. Many of the Golden State’s gun laws would have prohibited it.”

Assault Weapons: California law strictly prohibits assault weapons. This includes possessing, distributing, selling and manufacturing assault weapons. According to the Giffords Law Center, California’s assault weapons ban is one of the most comprehensive of the seven states and the District of Columbia that have bans on the books.

Red Flag Law: California became one of the first states in the nation to enact a red flag law in 2016. California law allows law enforcement, family members, employers, coworkers and school employees to file a Gun Violence Restraining Order (GVRO) against an individual suspected of being a danger to themselves and others. The GVRO prohibits a person from possessing firearms.

From 2019 to 2021, Governor Newsom signed a package of laws to further strengthen GVROs. Between 2016 and 2020, the number of GVROs increased from 85 to 1,284 – a 1,410% increase; of orders issued, law enforcement officers petitioned for more than 96% of the orders and family members requested the remaining four percent.

Universal Background Checks: California requires background checks on all gun purchases and transfers, including private transfers and sales at gun shows. It is one of 14 states and the District of Columbia that require universal background checks.

Mental Health Reporting: California has some of the nation’s strongest laws preventing those with serious mental illness from acquiring firearms. California law requires the immediate reporting of involuntary inpatient and outpatient treatment, as well as those under guardianship. Mental health treatment facilities and psychotherapists are also required to report under certain circumstances.

Age Restrictions: In California, you must be at least 21 years of age to purchase firearms.  There are narrow exceptions to this restriction (e.g.18 year old with a valid hunting license is able to purchase certain long guns).

Governor Newsom and legislative leaders will continue working together to expedite additional bills pending before the legislature aimed at curbing gun violence and increasing safety in California communities.