In a letter to the Chair of the California Air Resources Board (CARB), Governor Newsom called for the state to ensure that the 2022 Climate Change Scoping Plan provides a path to achieve both the 2030 climate goal and state carbon neutrality no later than 2045, requesting that the final plan incorporate new efforts to advance offshore wind, clean fuels, climate-friendly homes, carbon removal and addressing methane leaks.

The Governor also announced that he will work with the Legislature to enshrine carbon neutrality into state law, increase the state’s ambition towards our 2030 climate goals and accelerate our clean energy targets, while supporting carbon sequestration from our natural and working lands and advancing safe and equitable engineered carbon removal. He will also work to finalize the state’s historic investments under the $53.9 billion climate commitment, with a focus on equity and community resilience, while expanding opportunities for climate innovation and manufacturing here in California.

The new targets and requested actions outlined in the letter include:

The California Air Resources Board will meet in the fall to consider adopting a final draft of the 2022 Climate Change Scoping Plan.

Governor Newsom today also announced the launch of a new climate dashboard highlighting state climate action and progress toward key targets. CalEPA will continue to expand the dashboard to help Californians understand the actions the state is taking to adapt to a changing climate, and track progress in areas such as zero-emission vehicle sales, clean energy job creation and consumer savings from energy efficiency standards.

Screenshots from the climate dashboard can be found below. 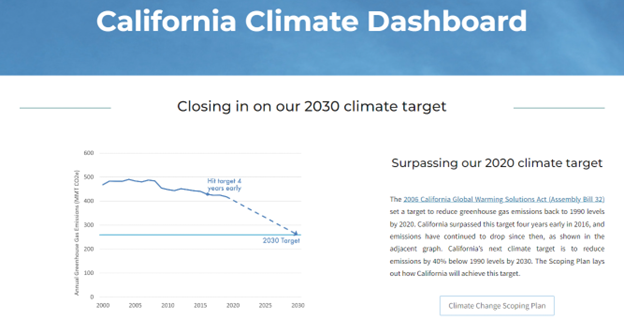