SACRAMENTO –  As Californians see renewed spikes in gas prices, Governor Gavin Newsom today called for a windfall tax on oil companies that would go directly back to California taxpayers.

While crude oil prices are down, oil companies have increased gas prices in California by a record 84 cents per gallon in just the last 10 days. At the end of August, crude oil prices were roughly $100 per barrel, and the average gas price in California was $5.06; now, even though the price of oil has decreased to $85 per barrel, the average gas price at the pump has surged to $6.29.

Meanwhile, oil companies have raked in unprecedented profits on the backs of hard-working Californians – nearly $100 billion in the last three months alone.

Oil companies have failed to provide an explanation for the unprecedented divergence between prices in California compared to the national average.
Governor Newsom Calls for Windfall Tax to Put Record Oil Profits Back in Californians’ Pockets

“Crude oil prices are down but oil and gas companies have jacked up prices at the pump in California. This doesn’t add up,” said Governor Newsom. “We’re not going to stand by while greedy oil companies fleece Californians. Instead, I’m calling for a windfall tax to ensure excess oil profits go back to help millions of Californians who are getting ripped off.”

Earlier today, Governor Newsom directed the California Air Resources Board (CARB) to make an early transition to winter-blend gasoline, and CARB took prompt action. This change is expected to immediately increase oil supplies by 5-10% and drop gas prices. When California did this in 2012, gas prices dropped by 25 cents within two weeks.

Also, starting next week, millions of Californians will get upwards of $1,050 in their bank accounts from the inflation relief program announced in the budget.

“As the cost of living continues to rise, California families have been forced to cut back on spending and rethink their budgets,” said California Attorney General Rob Bonta. “Earlier this year, my office warned refineries against taking advantage of ongoing market disruptions, and I want to again be clear: Market manipulation is illegal. My office is monitoring the market closely, and we will not hesitate to take action if we find evidence that the law is being violated.” 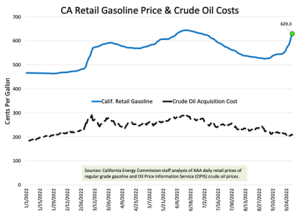 RETURNING OIL INDUSTRY PROFITS TO CALIFORNIANS: Crude oil prices are dropping, but oil and gas companies are still raising prices on California consumers. These price hikes cannot be attributed solely to refinery maintenance issues, hurricane disruptions, or even state taxes. Governor Newsom is working with the Legislature to enact a new windfall profits tax on oil companies. Companies engaged in extraction, production, and refining of oil will pay a higher tax rate on their earnings above a set amount each year, and these recouped windfall profits will then be directed to rebates/refunds to California taxpayers impacted by high gas prices.

INCREASING GASOLINE SUPPLY: Earlier today, Governor Newsom directed the California Air Resources Board (CARB) to take immediate action to increase the state’s gasoline supply and bring down fuel prices by allowing oil refineries to make an early transition to winter-blend gasoline. When this action was taken in 2012, California gas prices declined by $0.25/gallon within 13 days, and $0.47/gallon after 20 days. CARB has issued an advisory allowing refineries to immediately begin distributing winter-blend gasoline.

EXPLANATION FOR UNPRECEDENTED SPIKE: The California Energy Commission (CEC) has sent a letter to industry executives demanding immediate and comprehensive explanations for this inexplicable, unprecedented spike in gas prices within the past 10 days. This explanation must address the fact that there haven’t been any new state costs or regulations, that planned and unplanned maintenance typically does not result in large increases like this, and crude oil prices are down.