The partnership promotes collaboration between the four regional governments on accelerating the transition to a low-carbon economy, investing in climate infrastructure like EV charging stations and a clean electric grid, and protecting communities from climate impacts like drought, wildfire, heat waves and sea-level changes. The SOC includes a major focus on equity, ensuring no communities are left behind in the transition to a low-carbon future.

Leaders of the four jurisdictions, each with their own ambitious climate agendas, came together to continue to strengthen regional approaches and connections – to help move essential climate work further and faster. 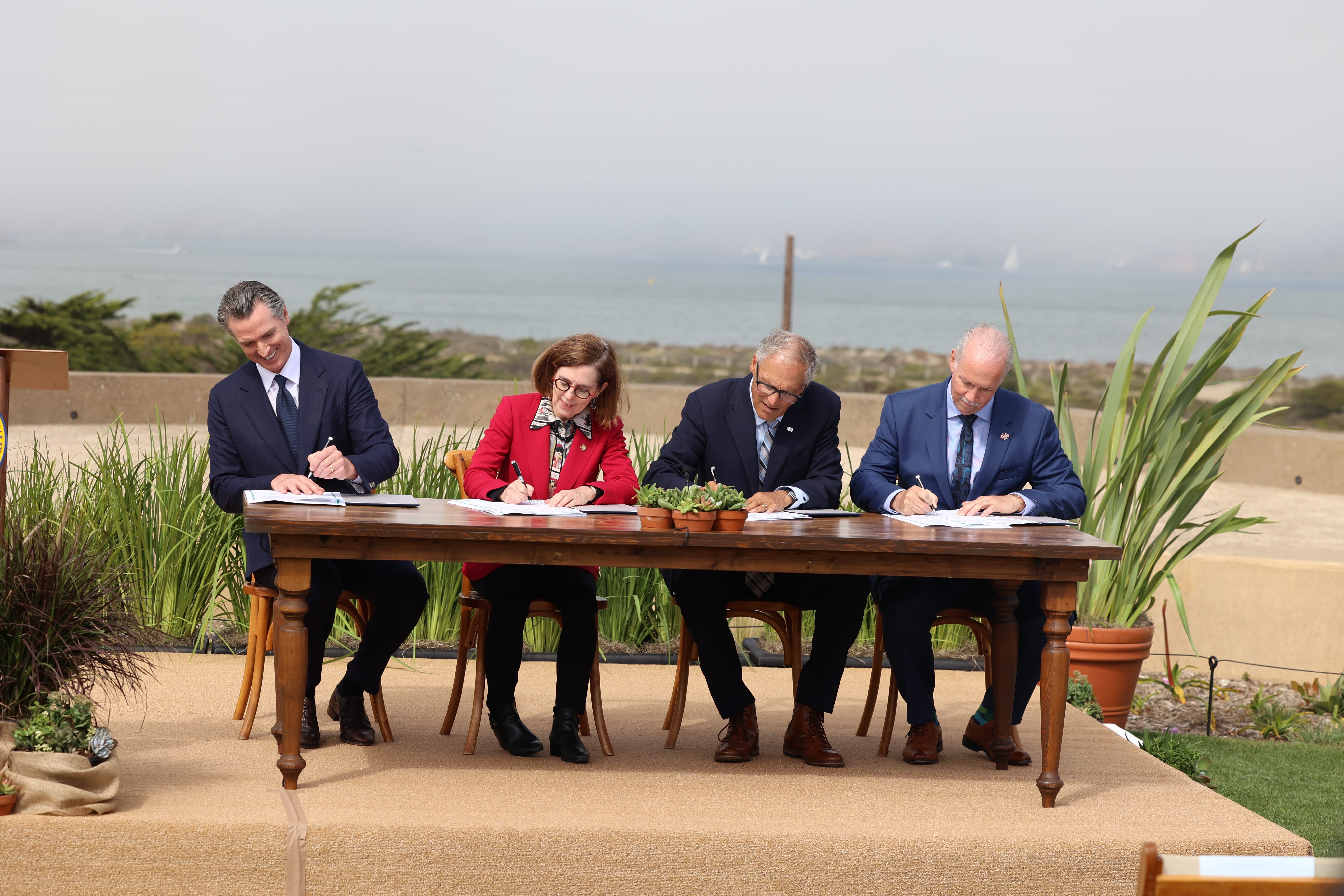 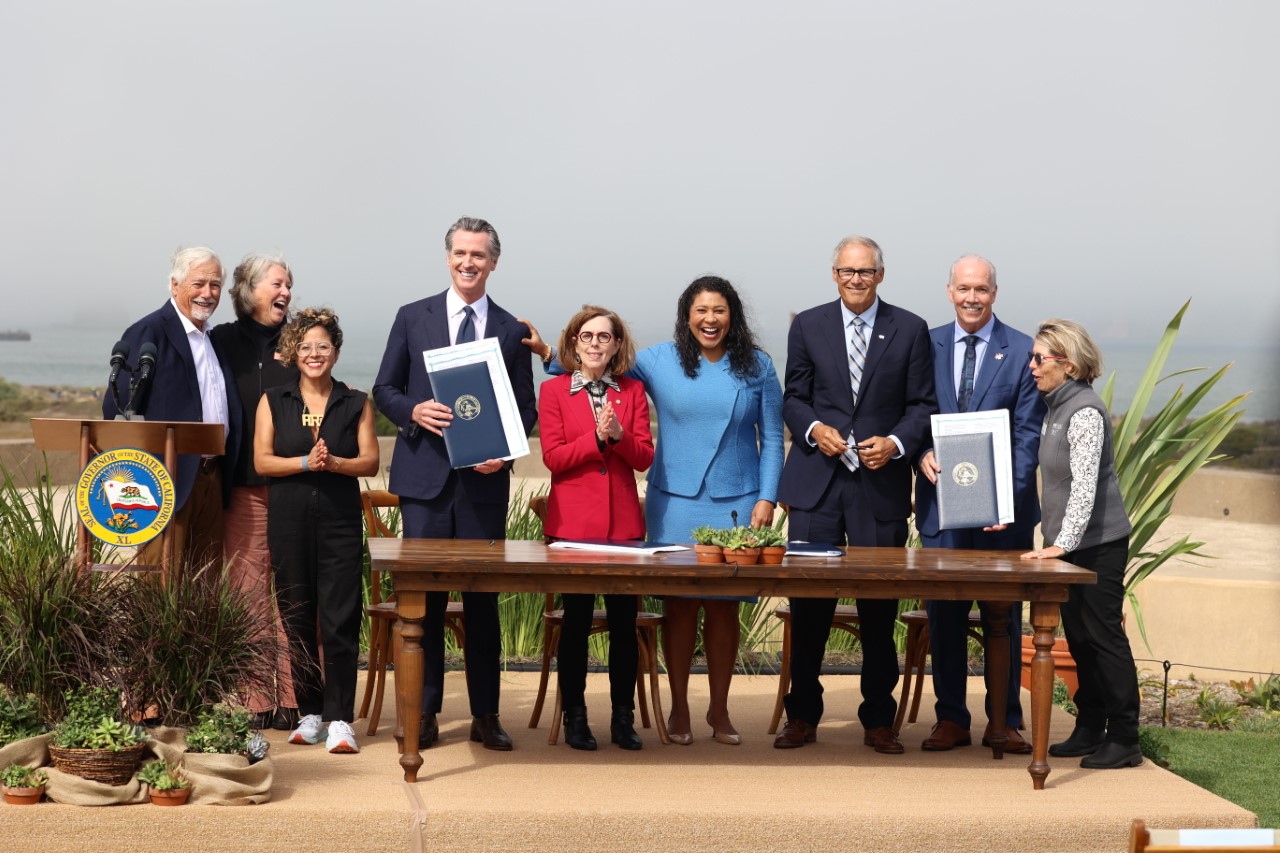 “In California, we punch above our weight when it comes to climate action – but our actions can only do so much without the rest of the world at our side. The Pacific Coast is raising the bar for tackling the climate crisis while also ensuring every community is included in our efforts. The West will continue to lead the way toward a carbon-free future that supports our economy, our people and our planet,” said Governor Newsom.

“The West Coast is united as we lead the way towards a clean energy future that helps our entire region and economies to thrive. In Oregon, we have set ambitious goals to reach 100% clean energy sources, reduce carbon emissions, and comprehensively address climate change. We are committed to addressing the impacts of climate change while also meeting the needs of our most vulnerable communities. Together, we are showing that it is possible to address climate change and create good-paying jobs at the same time, as we move towards a stronger, cleaner, equitable future,” said Oregon Governor Kate Brown.

“This new agreement reaffirms our commitments to decarbonize our economies at a time when the consequences of victory or defeat in this effort have never been more acute. Our partnerships speak to just how diverse and interconnected the green energy economy has already become. We know where it goes from here – onward to a cleaner, cheaper, and more efficient energy economy that averts climate calamity at the same time. Together we will invest in an equitable transition to a cleaner future, build the climate infrastructure we need, and protect our communities from climate-driven wildfires, droughts, heat and flooding,” said Washington Governor Jay Inslee.

“Here on the Pacific coast of North America, we’ve been on the frontlines of the climate crisis – both experiencing its most devastating impacts and leading the world in developing solutions to reduce carbon pollution. By signing this statement of cooperation, we’re building on our strengths as leaders in climate action and positioning ourselves for success in a clean energy economy. Working together, we’re charting a path to a cleaner, stronger future with good jobs and opportunities – for people on both sides of the border,” said Premier Horgan, British Columbia.

The Pacific Coast of North America represents a thriving region of 57 million people with a combined GDP of $3.5 trillion. Through the Pacific Coast Collaborative, British Columbia, Washington, Oregon, California, and the cities of Vancouver, Seattle, Portland, San Francisco, Oakland, and Los Angeles are working together to build the low carbon economy of the future. We share ambitious goals for reducing greenhouse gas emissions at least 80 percent by 2050. Watch a video on the Pacific Coast Collaborative here.

Last month, California enacted some of the nation’s most aggressive climate measures in history as Governor Newsom signed a sweeping package of legislation to cut pollution, protect Californians from big polluters, and accelerate the state’s transition to clean energy – an essential piece of the California Climate Commitment, a record $54 billion investment in climate action.

This year, California has signed Memorandums of Cooperation with Canada, New Zealand and Japan, as well as Memorandums of Understanding with China and the Netherlands, to tackle the climate crisis.

Last year, Governor Newsom and 24 governors from the bipartisan U.S. Climate Alliance committed to collectively achieve net-zero greenhouse gas emissions no later than 2050. Governor Newsom and other Under2 Coalition partners announced the transition to become a net zero coalition, raising ambition for member states and regions. California also joined the Beyond Oil & Gas Alliance, which brings together national and subnational governments committed to advancing a just transition away from oil and gas production.