SACRAMENTO – According to Bloomberg, California is poised to overtake Germany as the world’s 4th largest economy, continuing to outperform the nation and other countries in GDP growth, companies’ market value, renewable energy and more.

“While critics often say California’s best days are behind us, reality proves otherwise – our economic growth and job gains continue to fuel the nation’s economy,” said Governor Newsom. “California’s values and entrepreneurial spirit have powered this ascent to becoming the 4th biggest economy in the world, and we’ll continue doubling down on industries of the future, like renewables and clean energy. I feel tremendous pride in California’s resilience, leadership, and our formula for success.”

Here are some of the top takeaways from Bloomberg’s data:

Governor Newsom has implemented a $52 billion financial assistance package to help Californians with rising inflation and costs. The most robust and comprehensive stimulus program in the nation, it provides $26 billion in direct payments, $15 billion in tax relief and grants for businesses, and more.

As noted by Bloomberg, renewable energy has become California’s fastest-growing business. Governor Newsom has doubled down on clean energy and zero-emission vehicles, implementing a $10 billion package to make it more affordable for Californians to buy ZEVs while building out the state’s charging infrastructure. California now has six times more clean energy jobs than fossil fuel jobs, and ZEVs have become one of the state’s top exports.

IN CASE YOU MISSED IT

Bloomberg: California Poised to Overtake Germany as World’s No. 4 Economy

Contrary to popular belief, the Golden State has proven resilient, outperforming its US and global peers.

By Matthew A. Winkler
October 24, 2022
https://www.bloomberg.com/opinion/articles/2022-10-24/california-poised-to-overtake-germany-as-world-s-no-4-economy

Gavin Newsom is as familiar as anyone with the media narrative of earthquakes, persistent wildfires, droughts, homelessness and companies fleeing California to Texas for a tax- and regulation-free lifestyle. This is nothing new. California’s governor recalls a 1994 Time Magazine cover story citing “a string of disasters rocks the state to the core, forcing Californians to ponder their fate and the fading luster of its golden dream.”

And yet, “the California dream is still alive and well,” the state’s 40th governor said in a Zoom interview a month before his probable reelection.

He’s not wrong. California’s economy has proven relatively resilient, first through the pandemic and now through the current period of elevated inflation. So much so, that the Golden State’s gross domestic product is poised to overtake Germany’s as the fourth largest in the world after the US, China and Japan. It had already leapfrogged Brazil (No. 7) and France (No. 6) in 2015 and supplanted the UK (No. 5) in 2017. Although many of California’s current figures won’t be published until 2023, estimates suggest the state may have already caught Germany, with at least one forecast implying California is ahead by $72 billion when considering the state’s recent growth rate. 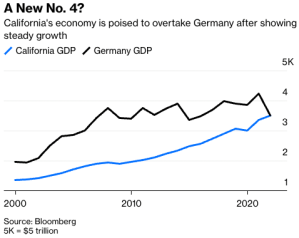