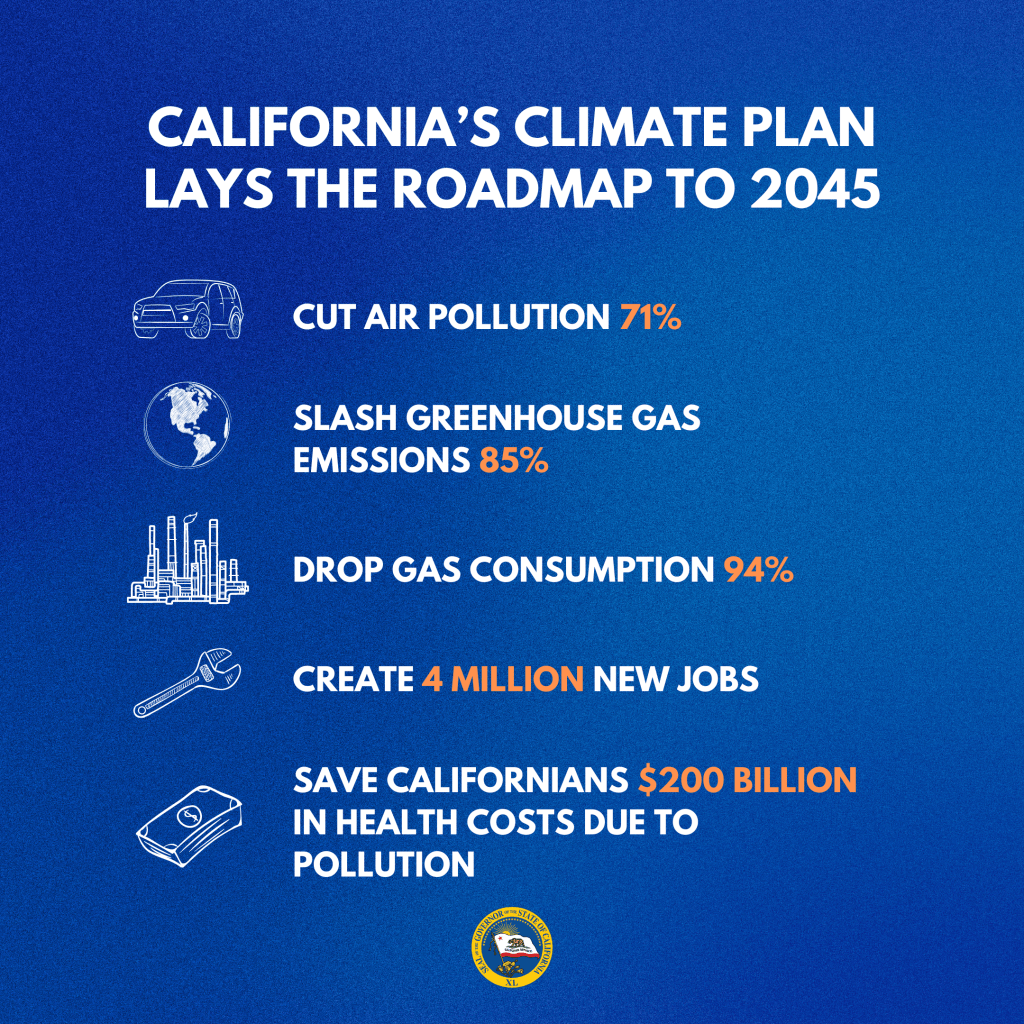 Amid global climate talks, the Scoping Plan lays out world’s first detailed pathway to carbon neutrality by 2045, as signed into law by Governor Newsom earlier this year

Today, the California Air Resources Board (CARB) released its updated proposal to implement the most ambitious climate action of any jurisdiction in the world, taking unprecedented steps to drastically slash pollution and accelerate the transition to clean energy. No economy in the world, much less the soon-to-be 4th largest, has put forth such a comprehensive roadmap to reach carbon neutrality.

This updated plan follows Governor Gavin Newsom’s push to move faster to achieve new, ambitious climate goals, setting new targets for renewable energy, clean buildings, carbon removal, and clean fuels in the transportation sector. If adopted by CARB, this plan will be a critical component of Governor Newsom’s California Climate Commitment – a set of world-leading actions to build out a 100% clean energy grid, achieve carbon neutrality by 2045, ramp up carbon removal and sequestration, protect Californians from harmful oil drilling, and invest $54 billion to forge an oil-free future while building sustainable communities throughout the state.

The updated Scoping Plan would achieve carbon neutrality by 2045, in addition to:

“California is drastically cutting our dependence on fossil fuels and cleaning our air – this plan is a comprehensive roadmap to achieve a pollution-free future,” said Governor Newsom. “It’s the most ambitious set of climate goals of any jurisdiction in the world, and if adopted, it’ll spur an economic transformation akin to the industrial revolution. While big polluters focus on increasing their profits at our expense, California is protecting communities, creating jobs and accelerating our transition to clean energy.”

The plan would also raise the stakes for clean energy and climate resiliency, calling for:

Today’s release follows the latest Greenhouse Gas Inventory, showing that 2020 had the steepest recorded drop in pollution in California history due to the pandemic, and including updated data showing California reached its 2020 climate targets six years ahead of schedule in 2014 rather than the initially estimated four.

Throughout California, leaders from the environmental, clean energy, academic, labor, and business communities have weighed in on the proposal:

“Finally there is a climate action plan that has the potential to bend the warming curve in time. The plan contains all of the essential ingredients of climate resilience: fossil free energy generation; reduction of short lived super pollutants; air pollution abatement; climate justice; restoration of nature’s role as carbon sink. It integrates effortlessly mitigation, adaptation and transformation. This is the new way to address the climate crisis. The health benefits of these actions alone will pay for the huge investment by the state. Having worked on climate change science since 1975, I am finally seeing a climate solutions plan that recognizes the grave risks posed by the climate crisis; I hope the rest of the planet will follow the California example.” – V. Ram Ramanathan, Distinguished Professor Emeritus, University of California at San Diego

“The science is clear: to avoid the worst impacts of climate change, the world must rapidly cut greenhouse gas emissions in the current decade. Governor Newsom understands the importance of near-term ambition, and his Administration is to be commended for delivering a Scoping Plan that exceeds California’s 2030 emissions reduction goal while providing necessary air quality and public health benefits for all Californians. EDF looks forward to working with the Air Resources Board and partner agencies to adopt policy in the coming year – including a more ambitious emissions cap – that locks in these necessary reductions.” – Katelyn Roedner Sutter, California State Director, Environmental Defense Fund (EDF)

“We stand ready to partner with the Governor on implementing this ambitious plan while growing living-wage clean energy jobs. IBEW’s close partnership with the state will help California lead the world in building a clean energy future for decades to come.” – Joel Barton, Secretary Treasurer of the State Association of Electrical Workers

“The Yurok Tribe applauds CARB for establishing a progressive Scoping Plan to implement the state’s climate goals. We especially appreciate efforts to include Tribal voices in the development of the plan.  We now look forward to moving to implementation of the plan in the years ahead.” – Chairman James, The Yurok Tribe

“The Scoping Plan contains many ambitious goals that will create major benefits for California and the world if we succeed in reaching them. But until we take action, it is just a report. It is our job as an advocacy community to turn seemingly impossible goals into realities and to prevent outcomes that continue the legacy of environmental racism at the hands of polluting fossil fuel companies. NextGen stands ready to work with the State to build a California that we can all be proud of.” – David Weiskopf, Senior Policy Advisor, NextGen Policy

“We have an urgent call to action and unless we act decisively, many of our communities will continue to experience severe impacts of a worsening climate. We know smart land management across California is essential to every region in the state. To advance a healthier and thriving California, we must double down on our efforts to accelerate nature-based climate solutions that increase access to nature and protect our public health. The Trust for Public Land, in partnership with the State of California, is ready to advance and deliver on this agenda.” – Juan Altamirano, Director of Government Affairs, Trust for Public Land

“The California Hydrogen Coalition supports the Scoping Plan’s bold framework of action that is inclusive of clean and renewable hydrogen. Paired with Governor Newsom’s and the Legislature’s creation of ARCHES to leverage federal funding opportunities, the Scoping Plan supports hydrogen as a mitigation tool for short-lived but potent methane emissions and the management of biomass without combustion in addition to enabling deeper penetration of renewable electricity by providing greater grid resiliency and reliability. Decarbonized and renewable hydrogen in fuel cells for zero-emission transportation, transit, goods movement, industrial activities, and power will enable California to cost-effectively achieve carbon neutrality. We look forward to CARB adopting the Scoping Plan.” – Teresa Cooke, Executive Director, California Hydrogen Coalition

“Nothing could be more important to community resilience, improved air quality, public health, and  economic prosperity in the rural regions of the state than the 2022 Scoping Plan proposal to conserve 30% of the California’s natural and working lands by 2030 and treat more than 2 million acres a year to reduce the risk of wildfire and capture carbon in our soils. This strategy will drive innovation in rural regions and create thousands of good jobs in rural communities.” – Steve Frisch, President, Sierra Business Council

“The landmark ambition of the Scoping Plan and 2022 legislative actions sets California on a course to build energy, transportation, and decarbonization infrastructure that will rival the new deal in terms of scale. Ambition demands action – CCEEB’s membership is ready to build the necessary infrastructure to achieve our shared climate goals. We will work diligently with the Governor, Legislature, local governments, and CARB to permit and build a carbon neutral future for all Californians with strong economic and labor protections that support a thriving middle class.” – Tim Carmichael, President and CEO, California Council for Environmental and Economic Balance (CCEEB)

“The Los Angeles Business Council commends CARB for crafting a Scoping Plan that will allow the state to meet its necessary climate targets, while creating clear guidelines for industry to follow. The Scoping Plan lays out a crucial roadmap to achieve carbon neutrality by 2045 and 100% zero emission vehicle sales by 2035 that are critical to climate, public health, and economic goals. California has proven time and time again that science-based public policy can and will reduce the adverse impacts of climate change, improve health outcomes for Californians, and spur in-state investment and job creation that has allowed California to be the number one clean energy job creator in the nation.” – Mary Leslie, President, Los Angeles Business Council

“PG&E commends CARB for its robust public process to develop the Scoping Plan. It establishes the right framework to achieve the Governor’s and the State’s ambitious climate goals, while minimizing costs to customers. The Plan allows for a wide range of decarbonization strategies, and will help deliver carbon neutrality through significant economy-wide emissions reductions and carbon removal. It’s aligned with PG&E’s decarbonization strategy, and supports the nation’s clean energy strategy.” – Carla Peterman, Executive Vice President of Corporate Affairs and Chief Sustainability Officer, PG&E

“By recognizing the essential role of natural climate solutions in its Scoping Plan update, California is again taking the lead in addressing climate change. Working with nature acts to both reduce harmful emissions and promote adaptation, a necessity underscored at COP 27. California, with its highly productive and biodiverse forests – which store vast amounts of carbon but also are the state’s water source and biodiversity treasure house – is uniquely poised to model new approaches to climate smart land management.” – Laurie Wayburn, President, Pacific Forest Trust

“The Scoping Plan reinforces the need to urgently increase tree canopy by 10% above current levels as called for in AB 2251 in order to sequester carbon, reduce climate risks, support canopy equity, and protect public health and safety in California’s most vulnerable communities. TreePeople appreciates this recognition of the critical role urban forestry plays in California’s landscape and stands ready to work with the state and partners across California to achieve these targets as a first step and elevate the role of all natural and working lands in the Scoping Plan.” – Cindy Montanez, Chief Executive Officer, TreePeople

“California’s path to achieving carbon neutrality by 2045 depends on strong statewide action to decarbonize our homes and buildings through immediate and direct cuts to pollution with policies developed in partnership with environmental justice communities. CARB’s commitment in its Scoping Plan to achieving Governor’s Newsom’s goal of deploying six million heat pumps and creating three million climate-ready homes by 2030, and seven million climate-ready homes by 2035 is a significant step in the right direction. Overall, it is vital that California pursue strategies that will clean the air in front-line communities long over-burdened by pollution. We look forward to creating a healthier, safer future for Californians by ensuring decarbonization strategies are led by communities and prioritize high-road jobs.” – Jose Torres, California Director, Building Decarbonization Coalition