Here’s What California Accomplished in 2022 on Climate

What you need to know: California implemented ambitious measures to drastically cut pollution, get more people in ZEVs with more chargers on the road, protect communities from wildfires and drought, and more

This was the year for climate action in California, enacting world-leading measures to drastically cut pollution and protect Californians from extreme weather like drought, wildfires, and extreme heat.

What Governor Gavin Newsom said: “California is in the business of getting things done: slashing air pollution, launching the clean energy revolution, holding Big Oil accountable, eliminating the tailpipe, and fighting climate-driven crises like wildfire, drought and extreme heat. We’re taking action now because we know later is too late.” 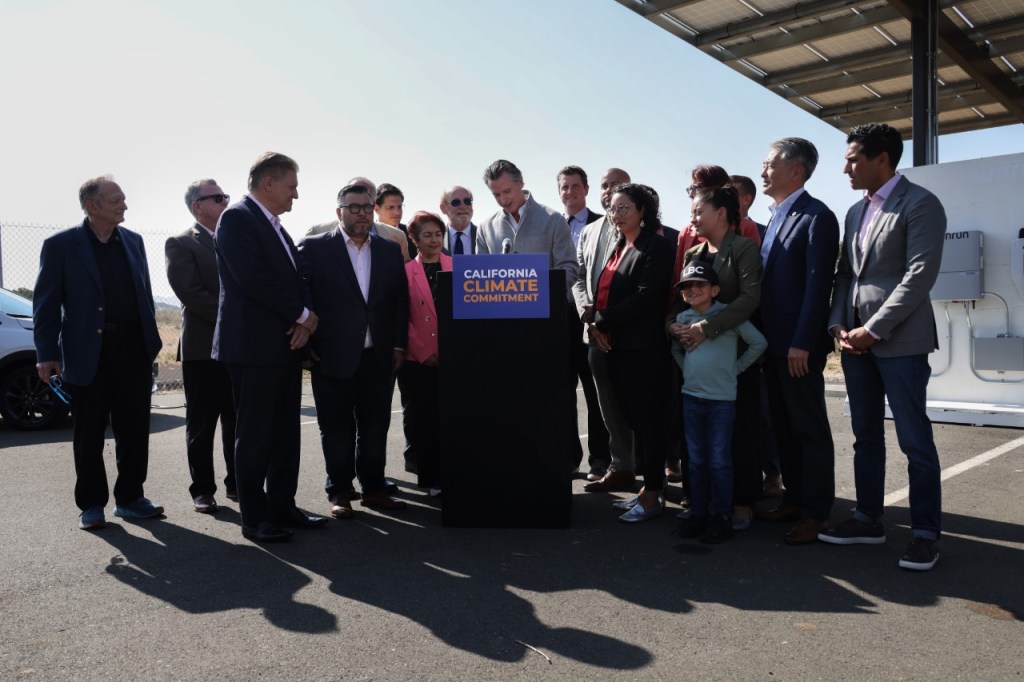 🌬️ 85% CUT IN EMISSIONS, ACHIEVING NET ZERO POLLUTION: California will reach net zero carbon pollution no later than 2045, under a new law signed by Governor Newsom, while also ensuring an 85% cut in greenhouse gas emissions as part of that goal. The state also implemented new measures to help cut air pollution with new carbon capture and removal technologies, as well as enlisting nature to remove carbon from the atmosphere.

⚡ 100% CLEAN ENERGY GRID, NEW OFFSHORE WIND: The Governor signed legislation to accelerate the transition to 100% clean energy – adopting a new target of 90% clean energy by 2035 and 95% by 2040, ensuring the state reaches its 100% target by 2045. California was also home to the first offshore wind lease sale on the West Coast, a milestone on the state’s march to clean energy and its new goal to add 25 gigawatts of offshore wind energy by 2045. 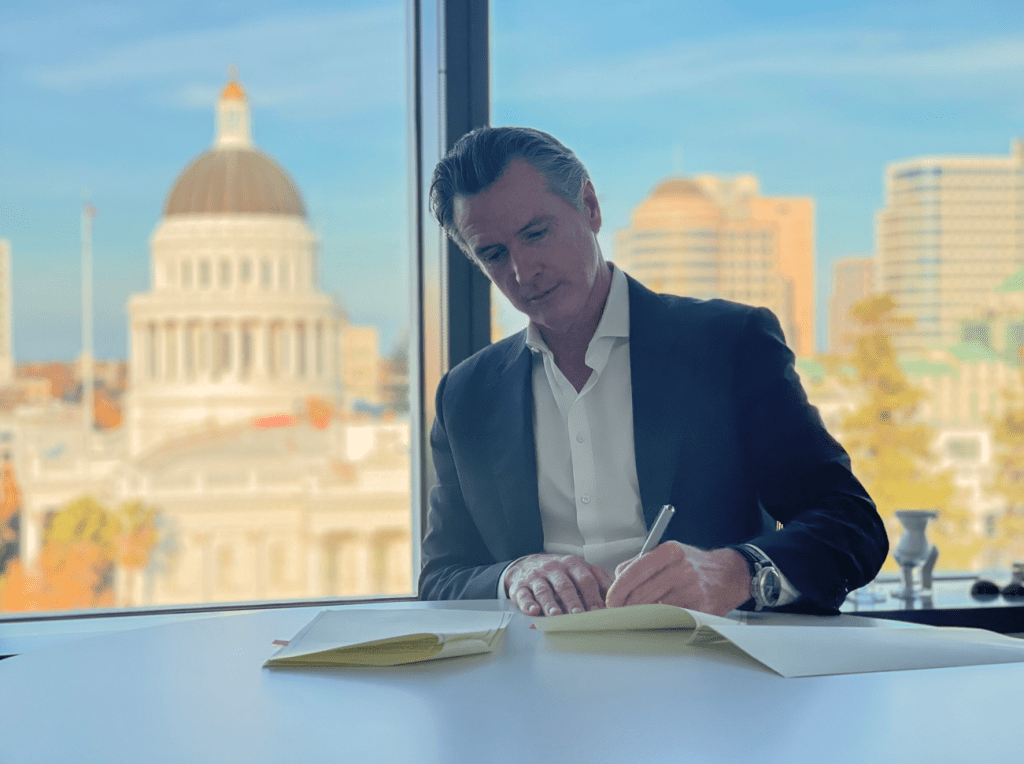 🚫 NO NEW OIL DRILLING NEXT TO SCHOOLS AND DAYCARES: As part of the California Climate Commitment, Governor Newsom signed nation-leading legislation to establish a setback distance of 3,200 feet between any new oil well and homes, schools, or parks. It also ensures comprehensive pollution controls for existing oil wells within 3,200 feet of these facilities.

⛽ HOLDING BIG OIL ACCOUNTABLE FOR PRICE HIKES & RECORD PROFITS: Following unprecedented price hikes at the pump that led to record profits for Big Oil, Governor Newsom convened a Special Session of the Legislature to hold Big Oil accountable – announcing a price gouging penalty and other accountability and transparency measures to protect Californians from being ripped off by Big Oil.

🚗 CHARGING AHEAD WITH ZERO-EMISSION VEHICLES: Following Governor Newsom’s 2020 executive order to develop new rules, the California Air Resources Board (CARB) approved one of the world’s first regulations requiring 100 percent of new car sales to be zero-emission vehicles (ZEVs) by 2035. Nearly 18% of cars sold in the state in 2022 were ZEVs, thanks to billions in new incentives and rebates for consumers. With a record investment in EVs, the state also is doubling its EV infrastructure with funding for 90,000 new EV chargers, bringing California closer to its goal of 250,000 publicly available chargers by 2025. That funding includes billions to expand clean transportation in underserved communities.

🗺️ NEW  ROADMAP TO CARBON NEUTRALITY: California is set to drastically slash pollution and accelerate the transition to clean energy. No economy in the world, much less the 4th largest, has put forth such a comprehensive roadmap to reach carbon neutrality. Under the plan, California will cut air pollution by 71% and emissions by 85%, reduce fossil fuel consumption by 86%, create 4 million new jobs, and save Californians $200 billion in health costs due to pollution. 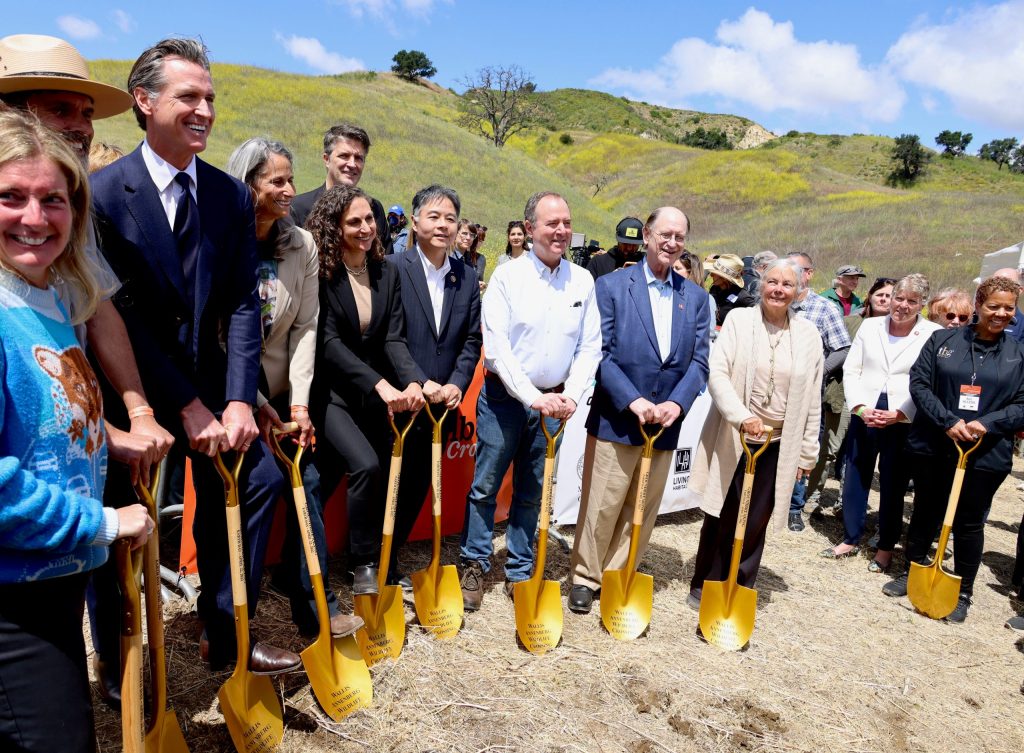 ⛰️ CONSERVING CALIFORNIA’S NATURAL BEAUTY: Governor Newsom released a strategy on how to achieve the state’s first-in-the-nation goal to conserve 30 percent of California’s lands and coastal waters by 2030 in order to protect biodiversity, expand access to nature, and tackle climate change. Roughly 190 nations followed California’s lead this month when they signed onto a United Nations agreement to do the same. The Governor also celebrated the groundbreaking of the world’s largest wildlife crossing, supported by state investments, which will provide a vital bridge for mountain lions and other Santa Monica Mountain wildlife to roam safely between two large areas of habitat.

🌡️ FIGHTING EXTREME HEAT: In September, California and the Western U.S. experienced a record 10-day heatwave that put unprecedented strain on the state’s electrical grid. California kept the lights on, thanks to years of smart investments and preparation – including thousands of megawatts of new clean energy battery storage – and extraordinary action by Californians to conserve energy. The Governor took action this year to prepare for future heat waves, including signing a bill that creates the nation’s first extreme heat advance warning and ranking system to better prepare communities ahead of heat waves. Heat funding included in the California Climate Commitment kickstarts the implementation of California’s Extreme Heat Action Plan launched in April that lays out the state’s broad heat resilience approach. 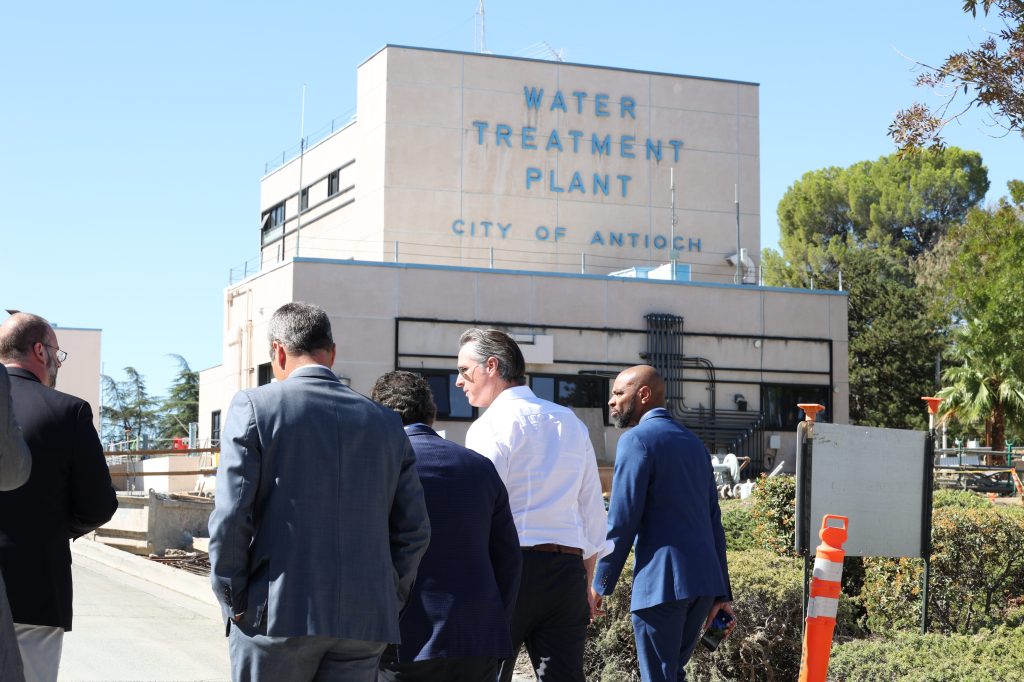 ☀️ PREPARING FOR A HOTTER, DRIER CALIFORNIA: Governor Newsom spearheaded a historic investment to protect people from extreme drought, and California unveiled a new strategy to increase water supply and adapt to more extreme weather patterns caused by climate change. With estimates that hotter, drier conditions could reduce California’s water supply by up to 10% by the year 2040, the strategy calls for investing in new sources of water supply, accelerating projects and modernizing how the state manages water through new technology.

🔥 MORE FUNDING & WORK AGAINST WILDFIRES THAN EVER BEFORE: CAL FIRE launched more than 552 wildfire resilience projects in less than a year and exceeded its 2025 goal of treating 100,000 acres a year, a full three years ahead of schedule. Never in California’s history has the state had the number of initial attack aircraft available to respond to fires that it does today, in addition to CAL FIRE’s existing fleet of 62 aircraft, 18 exclusive use helicopters, and 6 exclusive use fixed wing aircraft to provide even greater response capabilities.

🌎 PARTNERING WITH OTHER COUNTRIES: In just one year, California continued to build international partnerships on climate. California signed Memorandums of Cooperation with Canada, New Zealand and Japan, as well as Memorandums of Understanding with China and the Netherlands, to tackle the climate crisis. The Governor also joined with Washington, Oregon, and British Columbia to recommit the region to climate action.