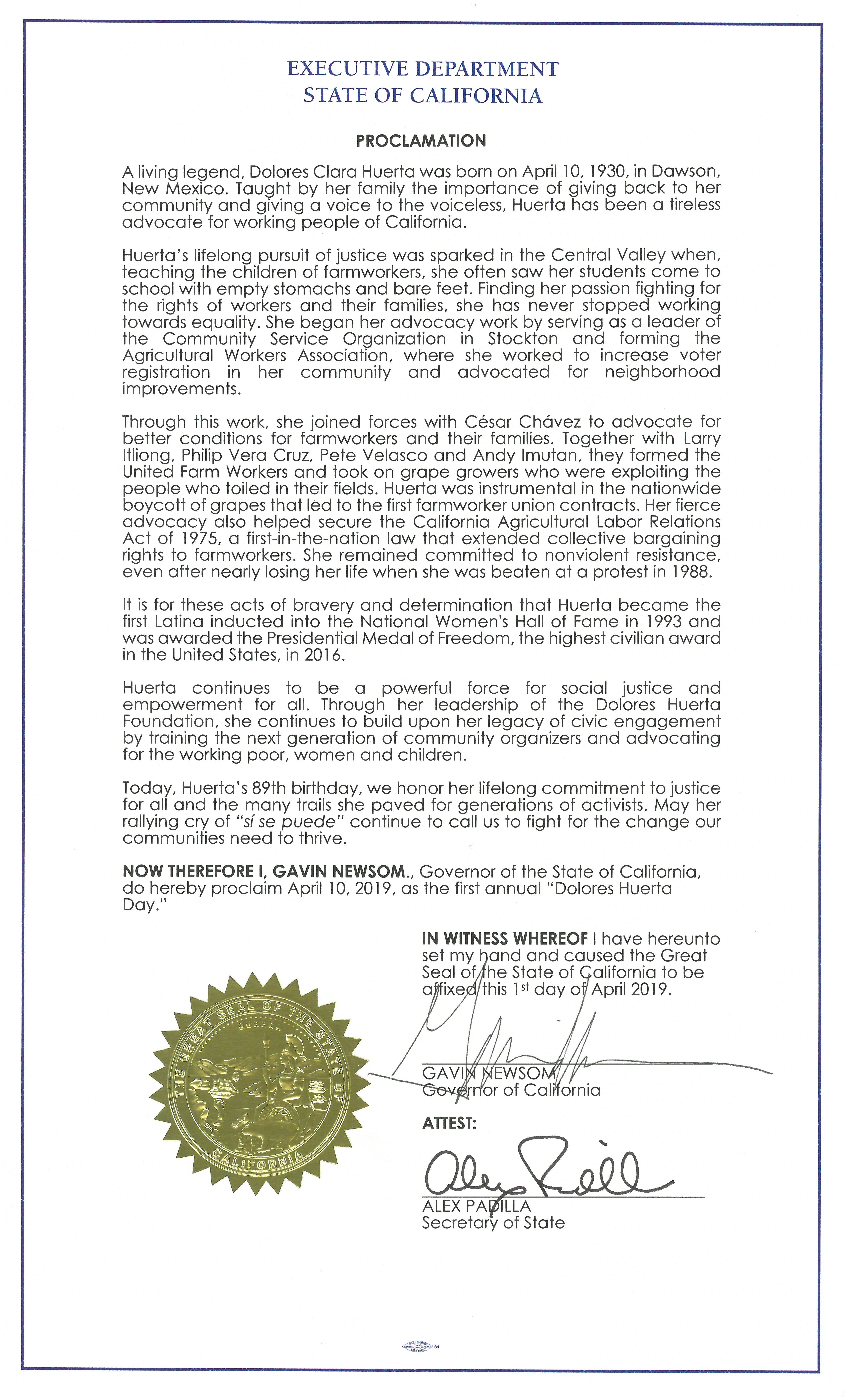 A living legend, Dolores Clara Huerta was born on April 10, 1930, in Dawson, New Mexico. Taught by her family the importance of giving back to her community and giving a voice to the voiceless, Huerta has been a tireless advocate for working people of California.

Huerta’s lifelong pursuit of justice was sparked in the Central Valley when, teaching the children of farmworkers, she often saw her students come to school with empty stomachs and bare feet. Finding her passion fighting for the rights of workers and their families, she has never stopped working towards equality. She began her advocacy work by serving as a leader of the Community Service Organization in Stockton and forming the Agricultural Workers Association, where she worked to increase voter registration in her community and advocated for neighborhood improvements.

Through this work, she joined forces with César Chávez to advocate for better conditions for farmworkers and their families. Together with Larry Itliong, Philip Vera Cruz, Pete Velasco and Andy Imutan, they formed the United Farm Workers and took on grape growers who were exploiting the people who toiled in their fields. Huerta was instrumental in the nationwide boycott of grapes that led to the first farmworker union contracts. Her fierce advocacy also helped secure the California Agricultural Labor Relations Act of 1975, a first-in-the-nation law that extended collective bargaining rights to farmworkers. She remained committed to nonviolent resistance, even after nearly losing her life when she was beaten at a protest in 1988.

It is for these acts of bravery and determination that Huerta became the first Latina inducted into the National Women’s Hall of Fame in 1993 and was awarded the Presidential Medal of Freedom, the highest civilian award in the United States, in 2016.

Huerta continues to be a powerful force for social justice and empowerment for all. Through her leadership of the Dolores Huerta Foundation, she continues to build upon her legacy of civic engagement by training the next generation of community organizers and advocating for the working poor, women and children.

Today, Huerta’s 89th birthday, we honor her lifelong commitment to justice for all and the many trails she paved for generations of activists. May her rallying cry of “sí se puede” continue to call us to fight for the change our communities need to thrive.

NOW THEREFORE I, GAVIN NEWSOM, Governor of the State of California, do hereby proclaim April 10, 2019, as the first annual “Dolores Huerta Day.”

IN WITNESS WHEREOF I have hereunto set my hand and caused the Great Seal of the State of California to be affixed this 10th day of April 2019.