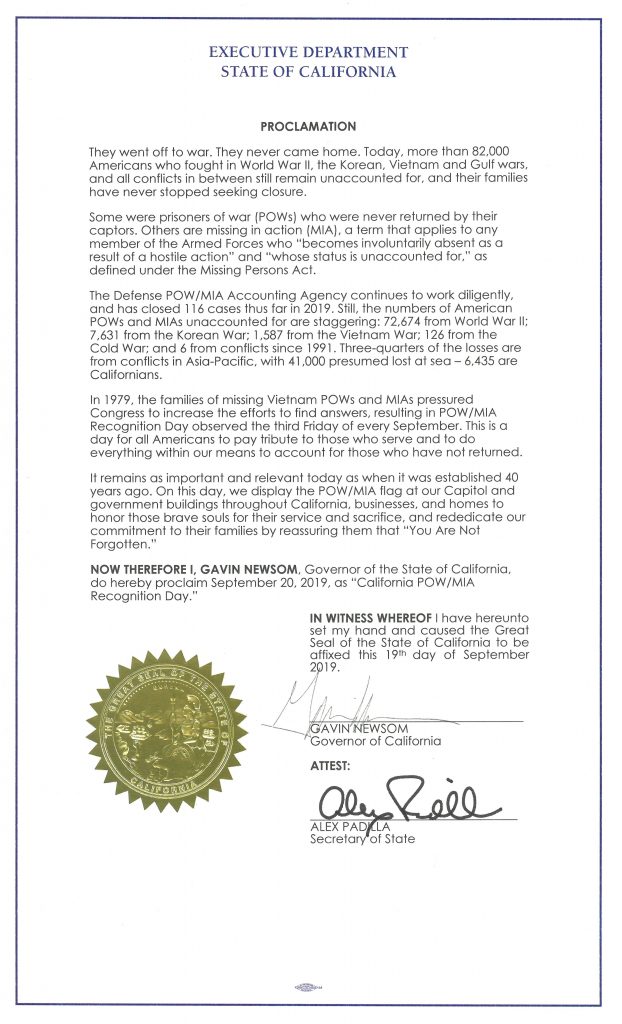 They went off to war. They never came home. Today, more than 82,000 Americans who fought in World War II, the Korean, Vietnam and Gulf wars, and all conflicts in between still remain unaccounted for, and their families have never stopped seeking closure.

Some were prisoners of war (POWs) who were never returned by their captors. Others are missing in action (MIA), a term that applies to any member of the Armed Forces who “becomes involuntarily absent as a result of a hostile action” and “whose status is unaccounted for,” as defined under the Missing Persons Act.

The Defense POW/MIA Accounting Agency continues to work diligently, and has closed 116 cases thus far in 2019. Still, the numbers of American POWs and MIAs unaccounted for are staggering: 72,674 from World War II; 7,631 from the Korean War; 1,587 from the Vietnam War; 126 from the Cold War; and 6 from conflicts since 1991. Three-quarters of the losses are from conflicts in Asia-Pacific, with 41,000 presumed lost at sea – 6,435 are Californians.

In 1979, the families of missing Vietnam POWs and MIAs pressured Congress to increase the efforts to find answers, resulting in POW/MIA Recognition Day observed the third Friday of every September. This is a day for all Americans to pay tribute to those who serve and to do everything within our means to account for those who have not returned.

It remains as important and relevant today as when it was established 40 years ago. On this day, we display the POW/MIA flag at our Capitol and government buildings throughout California, businesses, and homes to honor those brave souls for their service and sacrifice, and rededicate our commitment to their families by reassuring them that “You Are Not Forgotten.”

NOW THEREFORE I, GAVIN NEWSOM, Governor of the State of California, do hereby proclaim September 20, 2019, as “California POW/MIA Recognition Day.”

IN WITNESS WHEREOF I have hereunto set my hand and caused the Great Seal of the State of California to be affixed this 19th day of September 2019.