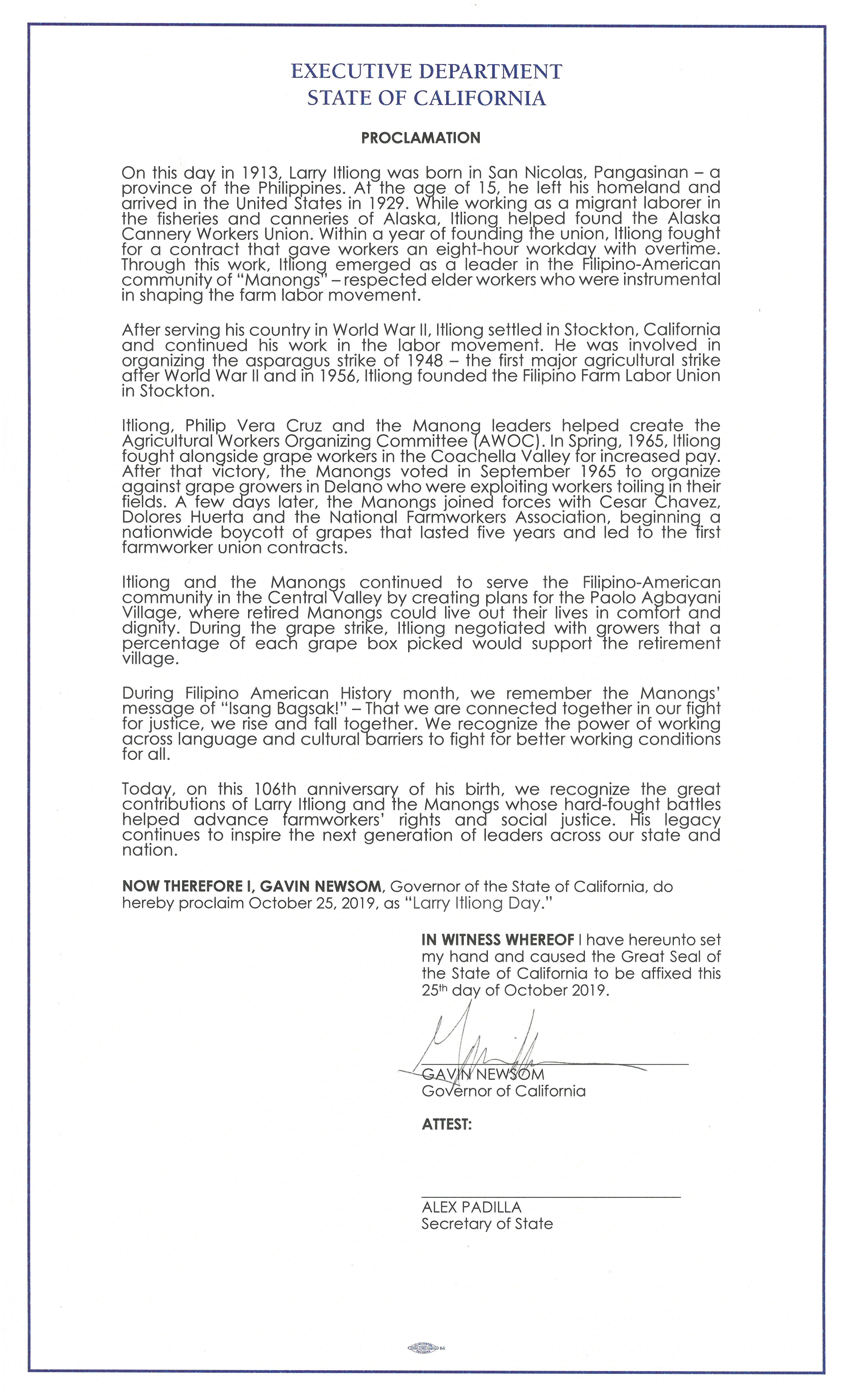 On this day in 1913, Larry Itliong was born in San Nicolas, Pangasinan – a province of the Philippines. At the age of 15, he left his homeland and arrived in the United States in 1929. While working as a migrant laborer in the fisheries and canneries of Alaska, Itliong helped found the Alaska Cannery Workers Union. Within a year of founding the union, Itliong fought for a contract that gave workers an eight-hour workday with overtime. Through this work, Itliong emerged as a leader in the Filipino-American community of “Manongs” – respected elder workers who were instrumental in shaping the farm labor movement.

After serving his country in World War II, Itliong settled in Stockton, California and continued his work in the labor movement. He was involved in organizing the asparagus strike of 1948 – the first major agricultural strike after World War II and in 1956, Itliong founded the Filipino Farm Labor Union in Stockton.

Itliong, Philip Vera Cruz and the Manong leaders helped create the Agricultural Workers Organizing Committee (AWOC). In Spring, 1965, Itliong fought alongside grape workers in the Coachella Valley for increased pay. After that victory, the Manongs voted in September 1965 to organize against grape growers in Delano who were exploiting workers toiling in their fields. A few days later, the Manongs joined forces with Cesar Chavez, Dolores Huerta and the National Farmworkers Association, beginning a nationwide boycott of grapes that lasted five years and led to the first farmworker union contracts.

Itliong and the Manongs continued to serve the Filipino-American community in the Central Valley by creating plans for the Paolo Agbayani Village, where retired Manongs could live out their lives in comfort and dignity. During the grape strike, Itliong negotiated with growers that a percentage of each grape box picked would support the retirement village.

During Filipino American History month, we remember the Manongs’ message of “Isang Bagsak!” – That we are connected together in our fight for justice, we rise and fall together. We recognize the power of working across language and cultural barriers to fight for better working conditions for all.

Today, on this 106th anniversary of his birth, we recognize the great contributions of Larry Itliong and the Manongs whose hard-fought battles helped advance farmworkers’ rights and social justice. His legacy continues to inspire the next generation of leaders across our state and nation.

NOW THEREFORE I, GAVIN NEWSOM, Governor of the State of California, do hereby proclaim October 25, 2019, as “Larry Itliong Day.”

IN WITNESS WHEREOF I have hereunto set my hand and caused the Great Seal of the State of California to be affixed this 25th day of October 2019.