SACRAMENTO – Governor Gavin Newsom today issued a proclamation declaring May 22, 2020, as “Harvey Milk Day” in the State of California. 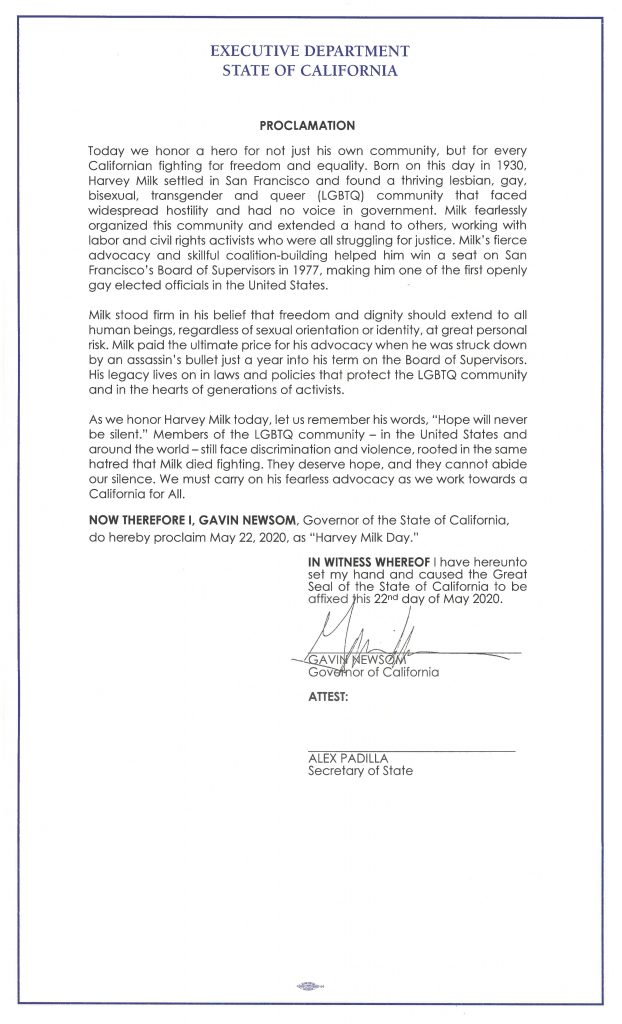 Today we honor a hero for not just his own community, but for every Californian fighting for freedom and equality. Born on this day in 1930, Harvey Milk settled in San Francisco and found a thriving lesbian, gay, bisexual, transgender and queer (LGBTQ) community that faced widespread hostility and had no voice in government. Milk fearlessly organized this community and extended a hand to others, working with labor and civil rights activists who were all struggling for justice. Milk’s fierce advocacy and skillful coalition-building helped him win a seat on San Francisco’s Board of Supervisors in 1977, making him one of the first openly gay elected officials in the United States.

Milk stood firm in his belief that freedom and dignity should extend to all human beings, regardless of sexual orientation or identity, at great personal risk. Milk paid the ultimate price for his advocacy when he was struck down by an assassin’s bullet just a year into his term on the Board of Supervisors. His legacy lives on in laws and policies that protect the LGBTQ community and in the hearts of generations of activists.

As we honor Harvey Milk today, let us remember his words, “Hope will never be silent.” Members of the LGBTQ community – in the United States and around the world – still face discrimination and violence, rooted in the same hatred that Milk died fighting. They deserve hope, and they cannot abide our silence. We must carry on his fearless advocacy as we work towards a California for All.

NOW THEREFORE I, GAVIN NEWSOM, Governor of the State of California, do hereby proclaim May 22, 2020, as “Harvey Milk Day.”

IN WITNESS WHEREOF I have hereunto set my hand and caused the Great Seal of the State of California to be affixed this 22nd day of May 2020.