Governor Newsom to criminals spreading illegal guns: “You have no safe harbor here in the Golden State.”

SANTA MONICA – At Santa Monica College, the site of a mass shooting that claimed the lives of six people including the gunman in 2013, Governor Gavin Newsom on Friday signed the nation’s first legislation allowing individuals to sue those spreading illegal guns as California continues to ramp up its gun safety protections.

SB 1327, authored by Senator Bob Hertzberg (D-San Fernando Valley), allows Californians to sue those making, selling, transporting or distributing illegal assault weapons and ghost guns – guns made at home to avoid tracing – for damages of at least $10,000 per weapon involved. The same damages are also available against gun dealers who illegally sell firearms to those under 21 years of age. The legislation is modeled after Texas’ wrongheaded anti-abortion bill, SB 8, which places $10,000 bounties on doctors, providers and others involved in providing life-saving abortion care.

After the U.S. Supreme Court declined to block the Texas law last fall, Governor Newsom called on the California legislature to pass a similar bill to add a new tool to California’s gun safety toolkit.

“Our message to the criminals spreading illegal weapons in California is simple: you have no safe harbor here in the Golden State. While the Supreme Court rolls back reasonable gun safety measures, California continues adding new ways to protect the lives of our kids. California will use every tool at its disposal to save lives, especially in the face of an increasingly extreme Supreme Court,” said Governor Newsom. 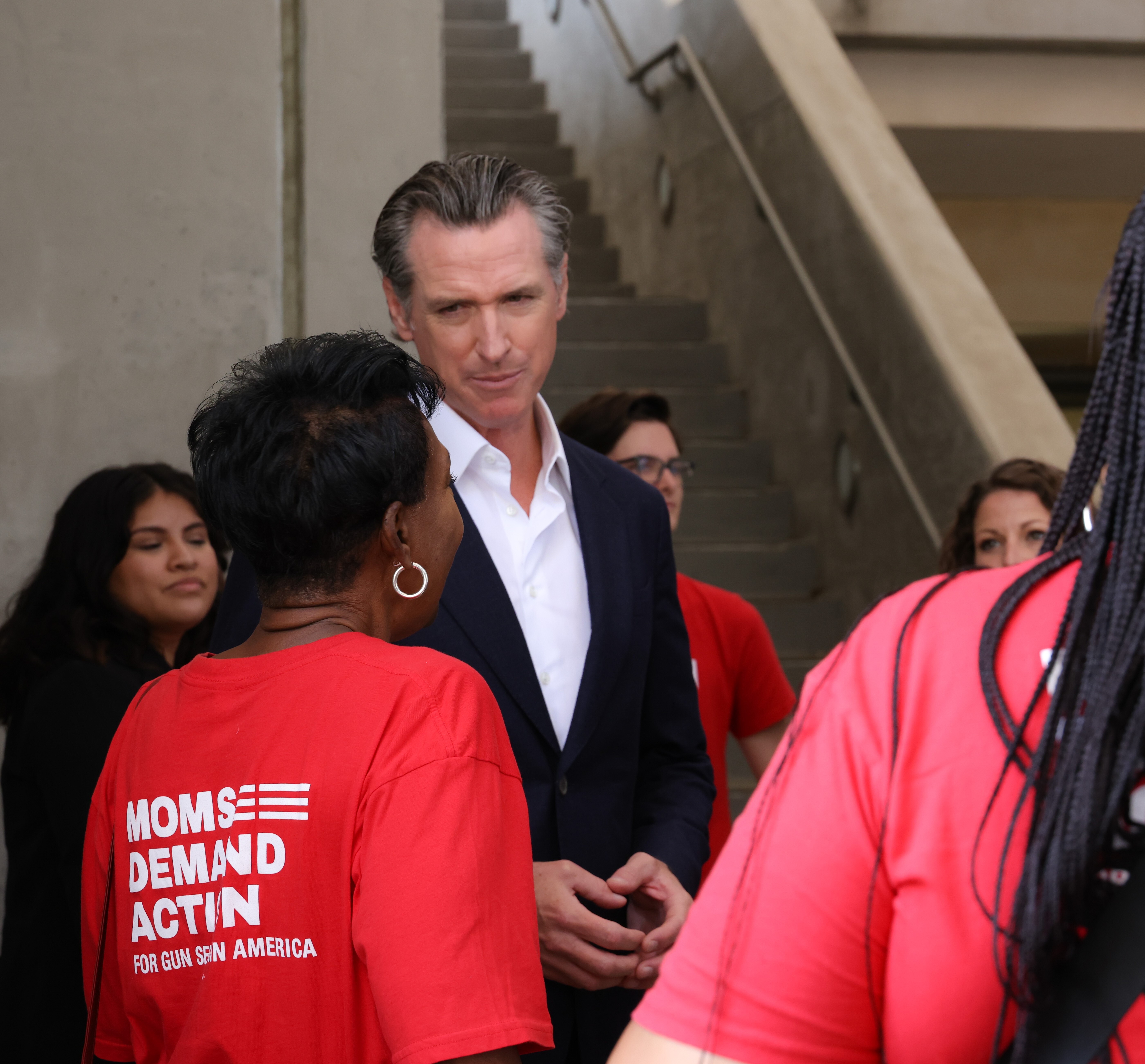 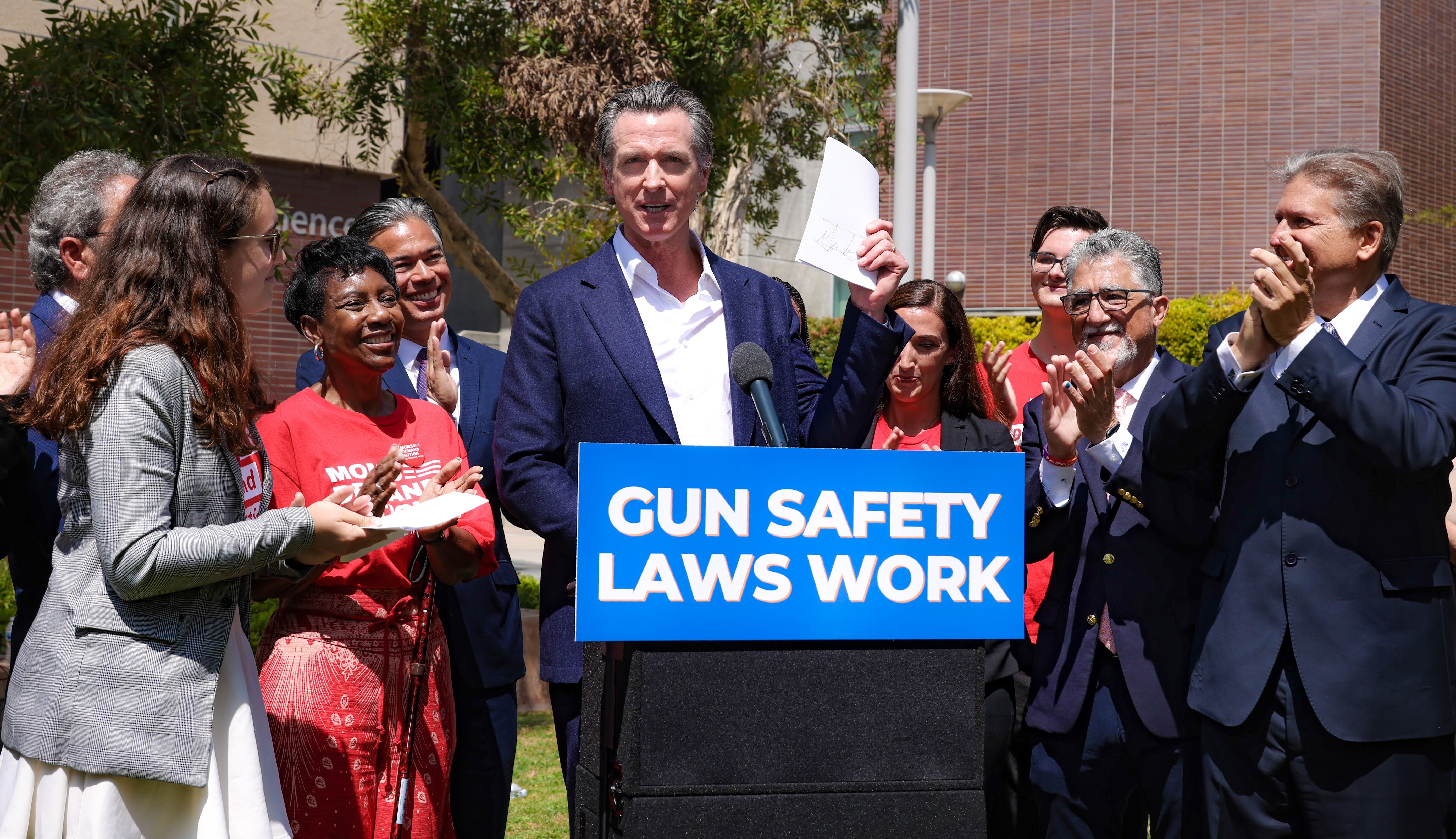 The Governor spoke at Santa Monica College, the site of a mass shooting that took the lives of six people in 2013, including the gunman. The 2013 shooting involved an unserialized AR-15 type semi-automatic rifle built by the shooter using legally purchased components, a ghost gun that would be subject to lawsuit once SB 1327 is law.

“For the sake of our children, this is a common sense step toward ensuring California streets, schools and communities continue to be among the safest in the nation,” Senator Hertzberg said after the Governor signed SB 1327 into law.

“Today is a momentous day for California,” said Mia Tretta, a gun violence survivor and volunteer with Students Demand Action. “SB 1327 will make it easier for victims of ghost gun violence, like me, to help enforce our gun laws. It will save lives by attacking the illegal ghost gun industry.”

“While some politicians put up roadblocks or say nothing can be done, here in California we are once again proving we can take on the gun lobby and protect our communities,” said Attorney General Rob Bonta. “With these new laws, California is protecting life, safety, and freedom. We have the strongest gun safety laws in the nation, and one of the lowest firearm mortality rates. This is not a coincidence. More guns do not make us safer — laws like these do. Period. I am committed to enforcing our commonsense gun safety laws, and keeping weapons of war off our streets and out of the hands of dangerous individuals.”

“The continued need to adopt sensible solutions to our nation’s tragic history of gun violence is dire and necessary,” said Senator Anthony Portantino. “That includes SB 1327 – which I am proud to jointly author with Senator Hertzberg. I am grateful to Governor Newsom for his partnership on this important bill that will keep our communities safe and improve public safety for all Californians. If Texas can outrageously use this type of law to attack a woman’s reproductive freedom, we can do the same thing in California to hold gun dealers accountable for their actions.”

“Untraceable ghost guns purchased without background checks have fueled gun violence throughout California and the nation and for far too long,” said Shannon Watts, founder of Moms Demand Action and California resident. “Thanks to leadership by gun sense lawmakers and relentless advocacy from our grassroots army, California continues to lead the nation in taking life saving action to combat ghost guns.”

California’s gun safety policies save lives and provide a national model for other states to follow. According to the Giffords Law Center, in 2021, California was ranked as the top state in the nation for gun safety. As California strengthened its gun laws, the state saw a 37 percent lower gun death rate than the national average. Meanwhile, other states such as Florida and Texas, with lax gun regulations, saw double-digit increases in the rate of gun deaths. As a result of the actions taken by California, the state has cut its gun death rate in half and Californians are 25 percent less likely to die in a mass shooting compared to people in other states.

Last month, Governor Newsom announced a record $156 million in gun violence prevention grants provided as part of the California Violence Intervention and Prevention Grant Program (CalVIP). The funding will support 79 cities and nonprofit organizations that are implementing anti-violence programs suited to the unique needs of their local communities.

A recent study from the Violence Prevention Research Program at the University of California, Davis found that California’s red flag law was used to stop 58 threatened mass shootings.