The Governor is traveling the state to hear from service providers, homeless individuals and local leaders on his Administration’s homelessness response

LOS ANGELES — Continuing his post-State of the State Homelessness Tour, Governor Gavin Newsom today visited South Los Angeles, where he met with formerly homeless families housed in travel trailers delivered by Caltrans earlier this month. The County of Los Angeles prepared the Safe Landing for Families site within weeks to move dozens of Californians off the street and into temporary housing.

The Governor today also announced the first cohort of local governments participating in 100-day challenges to partner with the state on immediate impact solutions to tackle homelessness. The first cohort includes the counties of Los Angeles, Alameda, Riverside and Stanislaus, with challenges expected to begin next month.

“Here in Los Angeles, we are already seeing the tangible impact of our emergency actions to tackle the homelessness crisis, a testament to what we can accomplish working hand-in-hand with local partners,” said Governor Newsom. “I am proud of the cities and counties taking on 100-day challenges to step up their efforts in an unprecedented level of partnership with the state to meet the magnitude of this moment.” 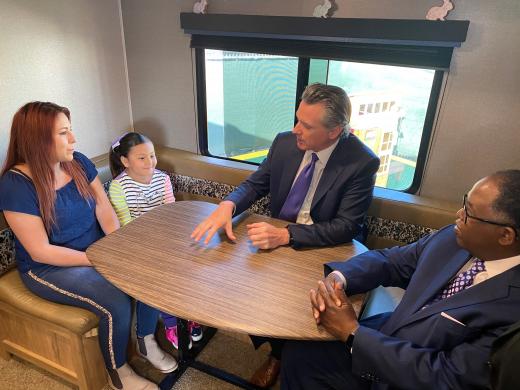 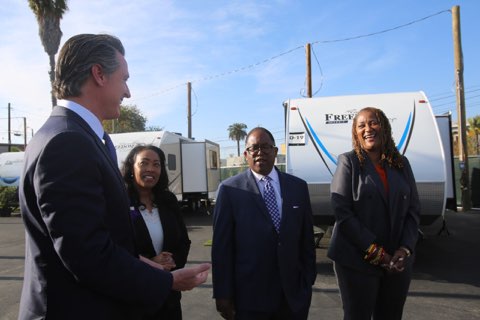 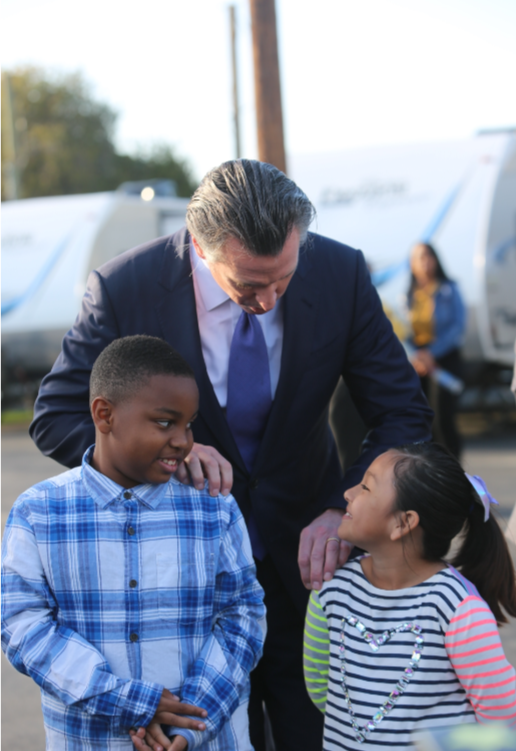 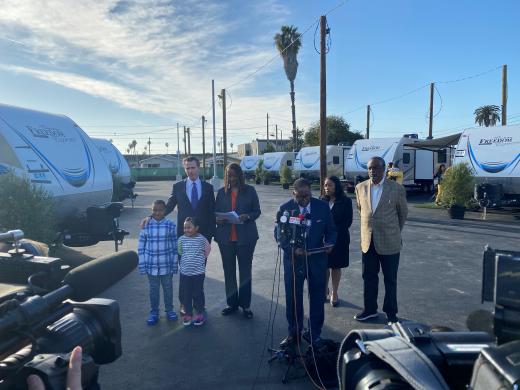 Governor visits Safe Landing for Families in Los Angeles, where homeless families are being housed in travel trailers delivered by the state this month

In response to the Governor’s executive action on homelessness in January, which deployed resources directly to local communities, the County of Los Angeles acted quickly to identify vacant land and set up power, sewage and water connections to install 10 travel trailers – delivered to the Safe Landing for Families site by Caltrans earlier this month –that now house families with children. Residents at this site will receive wraparound services and assistance in connecting with longer-term affordable housing. The travel trailers each have a bedroom, bathroom, kitchen and dining area, as well as other amenities. In the coming weeks, Caltrans will deliver an additional 20 travel trailers to Los Angeles, with the next batch arriving later this week, and dozens more statewide to partnering counties.

“This is what a comprehensive crisis response to homelessness looks like, and we applaud the Governor for setting it in motion,” said Los Angeles County Supervisor Mark Ridley-Thomas, co-chair of the Governor’s Council of Regional Homeless Advisors. “It took only weeks to transform this unused parking lot into a Safe Landing for Families – and that was because the state and local governments, private sector, and the community were all working urgently hand-in-hand.”

One of Los Angeles County’s Measure H-funded nonprofit partners, St. Joseph Center, deployed street outreach teams to identify the families who would move into the trailers – many of them previously lived on the streets or in motels in the immediate vicinity. Los Angeles County’s Chief Executive Office and Public Works Department, in coordination with Los Angeles City’s Department of Water and Power and other agencies, expedited the installation of electricity, water and sewage connections at the site, as well as other improvements to make it a safe, secure and welcoming environment.

Next month, Los Angeles County will begin two 100-day challenges – one in the East San Gabriel Valley focusing on employment outcomes for individuals receiving rapid rehousing subsidies, and another in South Los Angeles focused on increasing stable housing exits for interim housing clients to free up opportunities for more individuals to be sheltered.

Following his State of the State address underscoring the importance of working closely with local governments to tackle the homelessness crisis, the Governor last week announced 286 state-owned properties immediately available to cities and counties for $1 to use for homelessness solutions, and met with local leaders from the League of California Cities to outline his Administration’s five-part approach and invite partnerships.

The Governor has released the full $650 million in State Emergency Homeless Aid – of which Los Angeles County will receive $64.3 million. On the heels of his proposed budget featuring more than $1 billion to fight homelessness, and executive order on homelessness, Governor Newsom last month traveled to San Diego, Oakland, Grass Valley, Riverside, Los Angeles and Fresno, participating in a local point-in-time count and meeting with staff and residents at shelters, a board and care home, and a crisis stabilization center.